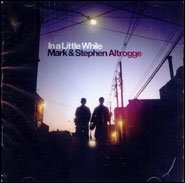 In a Little While (Mark & Stephen Altrogge) Sovereign Grace Music

A father and son, and two pastors now as well, combine for a series of songs from Sovereign Grace Music. Songs included on this CD are:

In a Little While

Mark Altrogge wrote his first worship song in 1980. Two years later, he was pastor of Sovereign Grace Church, Indiana, PA. Stephen, his oldest son, remembers riding in the car as a young boy when he son turned up the music, drummed on the steering wheel, and pointed out the guitar work. When teenage visions of “rock stardom” faded in Stephen’s mind, what was left were skill on the guitar and a love for the glory of God.

Stephen joined the worship team and started to write songs, in his father’s footsteps. Today, Stephen and his wife Jen are an integral part of the church his father leads. Father and son share the same goal: to combine truth about God with heart-stirring music, to help others worship our exalted God!

Songs included on this CD are:

Mark has been senior pastor of Sovereign Grace Church (Indiana, PA) since 1982. Over more than 25 years he’s written hundreds of songs for worship, including “I Stand in Awe” and “I’m Forever Grateful.”

Stephen began songwriting as a teenager, and his songs have recently appeared on Sovereign Grace albums such as Valley of Vision and Worship God Live.

The songs on In a Little While range from the upbeat, electric-guitar-driven “At the Cross” to a gentle rendition of a 17th-century hymn, “Whatever My God Ordains Is Right.”  All reflect the hope found where daily life meets biblical truth.