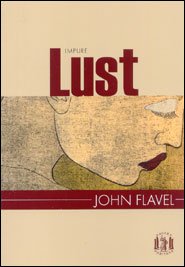 John Flavel faithfully and powerfully applies the warnings of Scripture against sexual immorality. He exposes both its truly horrid nature and frightening consequences, before giving sound advice on how to avoid the snares of sexual sin, and how to escape if ensnared.

This piece was taken from Flavel’s treatise entitled The Harlot’s Face in the Scripture Glass. A small, “pocket edition”, 3-1/2″ x 5-1/4″ volume.

In the Pocket Puritans series

John Flavel faithfully and powerfully applies the warnings of Scripture against sexual immorality. He exposes both its truly horrid nature and frightening consequences. Then, he provides sound advice on how to avoid the snares of sexual sin and how to escape if ensnared. This was taken from Flavel’s treatise The Harlot’s Face in the Scripture Glass. A small, “pocket edition”, 3-1/2″ x 5-1/4″ volume.

A Review by Rocky Pugh

“Impure Lust is a great little book with practical instruction in the battle against what has, sadly, become a much practiced sin. Flavel presents arguments against this sin and then directions for resisting this sin. Thoroughly biblical, Flavel presents Jesus as the only hope of sinners.”