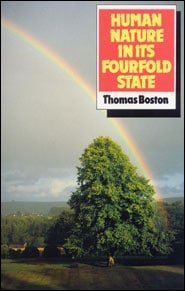 The famous work of this Puritan gives an exhaustive and full explanation of biblical teaching on the four different “states” of man’s relationship with God:
1) Man as Created: Innocent
2) Man as Corrupted: Sinful
3) Man as Redeemed: in Grace
4) Man in Heaven: Glorified

Human Nature in its Fourfold State

The famous work of this Puritan gives an exhaustive and full explanation of biblical teaching on the four different “states” of man’s relationship with God:

Boston has the skill of being so basic and readable, yet so complete in his Biblical research, that every reader, on any spiritual level, will profit from this book. For those who ask about the origin and meaning of human existence, Boston provides the biblical answer.  For those who are confused about the biblical gospel, Boston explains its meaning and power.

This work was out of print until 1989, ever since which time this classic has remained popular with those who want Biblical answers about man’s nature rather than listen to humanistic observations.

Born into relative obscurity in 1676 in Duns, Berwickshire, Thomas Boston died in 1732 in the small parish of Ettrick in the Scottish Borders. But his 56 years of life, 45 of them spent in conscious Christian discipleship, lend credibility to the spiritual principle that it is not where a Christian serves, but what quality of service he renders, that really counts.

Graduating in Arts from Edinburgh University, Boston spent only one session in theological college before completing his studies extramurally. With arduous discipline, his private studies, sustained by a meager library, earned him a widespread reputation. As a Hebrew scholar he was, writes George Morison, ‘welcomed as an equal by the finest Hebrew scholars in the world’; as a theologian, Jonathan Edwards wrote that he was ‘a truly great divine’. But it is as a loving, faithful, rigorously self-disciplined Christian pastor, and one deeply committed to the grace of God, that Boston is best remembered.

Leaving his first charge at Simprin (where he served 1699-1707), he settled in Ettrick for a 25-year ministry that saw the number of communicants rise from 60 to 777. Constantly burdened for his congregation, Boston taught them in season and out of season, in pulpit and in home; burdened for the truth of the gospel, he overcame all natural timidity to engage in controversy over the teaching of Professor Simson (who was charged with heretical doctrine), and in the famous ‘Marrow Controversy’.

It is, however, as a preacher that Boston’s influence was most widely felt. Out of that ministry came Human Nature in Its Fourfold State and other works of enduring value. Boston’s Memoirs record the joys and sorrows, the burdens and victories of his life.

‘If there is one book that more than any other stands out as representative of the best of our Scottish religious classics it is Human Nature in its Fourfold State.” — John Macleod’s review in Some Favourite Books