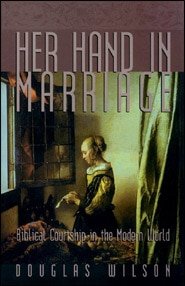 Her Hand in Marriage (Douglas Wilson)

The most thorough Biblical explanation of courtship we know of. It puts beyond question that a Biblical approach does not demand “arranged” marriage, but does see parental guidance at the forefront in your child’s selection of a lifelong partner.

Her Hand in Marriage

Biblical Courtship in the Modern World

The modern dating system is bankrupt. It does not train young people to form a relationship but rather to form a series of relationships, hardening themselves to all but the current one. Recreational dating encourages emotional attachments without covenantal fences and makes a joke of a father’s authority. The disrespect children have for their fathers in this area is an echo of the disrespect fathers have for their own office.

Biblical courtship provides a wonderful freedom. It involves familial wisdom and godly protection. Grounded upon the involved authority of the father, courtship delights in its public connection to the lives of the families. Sexual purity is a great inheritance for a marriage, and part of a father’s job is to guarantee and protect that heritage.

Biblical courtship is a humble affront to the sterility of modern relationships. And as a new generation rejoices in this ancient wisdom, the current waves of broken relationships will begin to recede.

Douglas Wilson is Pastor of Christ Church, Moscow, Idaho, and author of numerous books on the family, church and various aspects of Western culture and education. His wife Nancy is also author of several women’s books.

Once again Doug Wilson hits a home run with this book. Here is a work that addresses Biblical courtship in the Modern world. The book is filled with Wilson’s insight from Scripture, practical wisdom and instructional humor, and applicable for all who read this whether you are the guy, the girl or the parents involved with Christian courtship. I appreciated Wilson pointing out that courtship takes place with the authority of the daughter’s parents which is the subject of the first chapter. As I have a young daughter at this time, it’s a sobering admonition for my wife and I to consider in our daughter’s future. Here in chapter one Wilson brings some relevant Biblical passages including those from the Old Testament that I’ve never thought about it before.

Chapter one alone is worth the price of the book. In the second chapter Wilson addresses the topic of preparing sons for courtship in which the big points I took away from it was to prepare sons by modeling it in the family by the father, teaching on sexual purity and being a gentleman. A plus for his insight on young men and the issue of self-control. The third chapter then focus on preparing daughters for courtship including the discussion of modesty, biblical femininity and parental protection. This is followed by two other chapters on courtship itself and a beautiful allegorical story as an appendix that hallmarks Wilson’s desire to communicate Christian truth through great literature and other literary forms.” — Jim Lee, Domain for Truth Blog