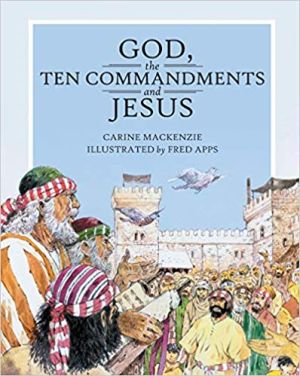 A fascinating retelling of a vital part of scripture. Children will love it and parents will love the positive teaching it gives on how we can obey God.

God, the Ten Commandments and Jesus

The commandments of God were kept perfectly by Jesus Christ and other people too were helped by God to follow his laws and obey his word.

Zaccheus was a thief whose life was changed around by meeting Jesus Christ so that he gave his money away instead of stealing it. David was a warrior who when given the chance to kill his enemy chose to obey God’s word instead. Joseph kept the seventh commandment by refusing to obey his bosses wife but was thrown in prison as a result.

All the commandments are covered as well as the true stories surrounding Mount Sinai and God’s writing of the ten commandments on the two stones.

“This book is to be welcomed in an age when children are no longer taught the Ten Commandments at school.”

Jesus and the Commandments

Carine MacKenzie’s talent for retelling Bible stories has meant that children from all over the world have been given the opportunity to discover Jesus Christ for themselves. Carine’s 150th book 365 Great Bible Stories was released in July 2011. She has sales of several million books and lives in Inverness, Scotland.