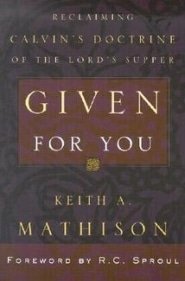 Given For You: Reclaiming Calvin’s Doctrine of the Lord’s Supper (Keith Mathison)

“The best and most comprehensive treatment of the Reformed doctrine of the Lord’s Supper I have ever seen. . . . a genuine ‘must read’ book.” —R. C. Sproul

The primary purpose of this book is to introduce, explain, and defend a particular doctrine of the Lord’s Supper — the doctrine taught by John Calvin and most of the 16th century Reformed confessions. This is not the doctrine that is taught in most Reformed churches today.

During the 16th and 17th centuries, two distinct views of the Lord’s Supper gained some measure of confessional authority in the Reformed church. The first view traces its roots to John Calvin, while the second traces its roots to Ulrich Zwingli’s successor Heinrich Bullinger.

“The best and most comprehensive treatment of the Reformed doctrine of the Lord’s Supper I have ever seen. . . . a genuine ‘must read’ book.” —R. C. Sproul

“Argues cogently for the liturgical significance of returning to Calvin’s richly nuanced view of the real presence of Christ in the sacrament.” —David E. Holwerda

“I know of no other book that combines solid research, pastoral concern, polemical edge, and attention to oft-forgotten biblical passages with such skill. Any informed decision an the Supper will need to include the careful reading of this volume.” —Michael S. Horton

“To my mind, the most thorough and clearest exposition of the evangelical and Reformed view of the Lord’s Supper in recent memory. A ready antidote to many of the ills that threaten historic evangelicalism.” —Frank A. James III

Appendix: The Lord’s Supper Before the Reformation

Keith A. Mathison (MA, Reformed Theological Seminary; PhD, Whitefield Theological Seminary) is dean of the Ligonier Academy of Biblical and Theological Studies and an associate editor of Tabletalk magazine at Ligonier Ministries. He is the author of Dispensationalism: Rightly Dividing the People of God?; Postmillennialism: An Eschatology of Hope; The Shape of Sola Scriptura; and Given for You: Reclaiming Calvin’s Doctrine of the Lord’s Supper. He is editor of When Shall These Things Be: A Reformed Response to Hyper-Preterism and associate editor of The Reformation Study Bible. He lives in Lake Mary, Florida, with his wife and children.