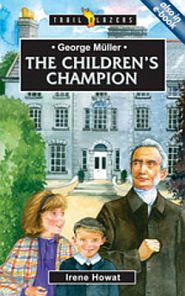 If you were an orphan in the city of Bristol, England, around 1850, life was hard! But if the kindness of God opened the doors of George Muller’s children’s home, Ashley Down, you were really looked after by a man who did all he could to transform the orphanage into a truly loving family.

Read the story of Muller’s conversion from a selfish, lying young man who frequently stole money, into a selfless servant of the needy, who knew that this was his calling to glorify Christ.

In the Trailblazers Series!

If you were an orphan in the city of Bristol in the 1800s, then your life was hard!  But if you got a place in Ashley Down, one of George Müller’s children’s homes, the future was bright for you!  It was like living a big, happy family.  George Müller was such a kind man and he prayed constantly for the children.

But George Müller’s own home life didn’t have a promising start. He was selfish and totally untrustworthy.  Would you trust someone who not only stole money from his friends, but even from own parents? He did!  By the age of sixteen, he had learned to lie, steal, drink and gamble and his future looked bleak – but God had other plans for George!

After conversion, George Müller’s life became a vivid demonstration of faith in action. Praying in every penny of the costs and refusing at any time to ask for financial help from anyone but God, Müller supervised the building of three large orphanages housing thousands of children. He was more successful than anyone could have imagined.

Müller’s hard work for the cause of Christ and on behalf of orphans, his commitment to their care and his example of faith in action inspired his generation and will do the same today.

A gripping and astonishing story that will challenge young readers to really trust God as Müller did.

Irene Howat is an award-winning author and a talented artist in Ayrshire, Scotland. She is married to a retired minister and they have a grown family. She especially enjoys receiving letters from her readers and replies to all of them. Irene is also the author of numerous other books for children, including all the volumes of the Lightkeepers Series (Ten Boys Who Changed History, Ten Girls Who Changed History and all the other Ten Boys / Ten Girls volumes).  In the Trailblazers series she has written Lillias Trotter: Danger in the Desert and Betty Greene: Courage has Wings.