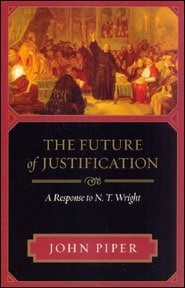 The Future of Justification: A Response to N.T. Wright (John Piper)

N. T. Wright’s confidence that the church has gotten it wrong for fifteen hundred years, given his enormous influence, has set off warning bells for Christian leaders such as John Piper, a pastor and New Testament scholar.

The Future of Justification

A Response to N.T. Wright

N. T. Wright, a world-renowned New Testament scholar and bishop of Durham in the Church of England, has spent years studying the apostle Paul’s writings and has offered a “fresh perspective” on Paul’s theology. Among his conclusions are that “the discussions of justification in much of the history of the church — certainly since Augustine — got off on the wrong foot, at least in terms of understanding Paul — and they have stayed there ever since.”

Wright’s confidence that the church has gotten it wrong for fifteen hundred years, given his enormous influence, has set off warning bells for Christian leaders such as John Piper, a pastor and New Testament scholar. If Wright’s framework for interpreting the New Testament text and his understanding of justification find a home in the church, not only could the doctrine of justification be distorted for generations to come, but the New Testament writers’ original intent could be silenced. In The Future of Justification Piper sounds a crucial warning, reminding all Christians to exercise great caution regarding “fresh” interpretations of the Bible and to hold fast to the biblical view of justification.

“John Piper’s challenging yet courteous book takes issue with Wright regarding Paul’s teaching on justification. This serious critique deserves to be read by all who want to understand more fully God’s righteousness in Christ and his justifying the ungodly.”
— Peter T. O’Brien, Senior Research Fellow, Moore Theological College, Sydney, Australia

“The so-called “New Perspective on Paul” has stirred up enormous controversy. The issues are not secondary, and, pastor that he is, John Piper will not allow believers to put their trust in anyone or anything other than the crucified and resurrected Savior.”
— D. A. Carson, Research Professor of New Testament, Trinity Evangelical Divinity School

“In this captivating book John Piper defends the truth that justification is the heart of the gospel. Wright’s views are presented with scrupulous fairness. I found this book to be not only doctrinally faithful but also spiritually strengthening.”
— Thomas R. Schreiner, Southern Baptist Theological Seminary, Louisville, KY

John Piper (DTheol, University of Munich) is the founder and teacher of Desiring God and the chancellor of Bethlehem College and Seminary. He served for 33 years as the senior pastor of Bethlehem Baptist Church in Minneapolis, Minnesota, and is the author of more than 50 books, including Desiring God; Don’t Waste Your Life; This Momentary Marriage; A Peculiar Glory; and Reading the Bible Supernaturally.