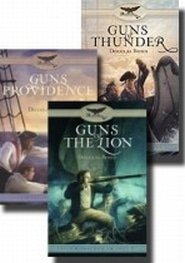 All three (3) volumes in the Faith and Freedom Trilogy by Douglas Bond:

Guns of the Lion

Scroll to bottom left to see full details about all three volumes.

The M’Kethe clan finds itself in pre-Revolutionary War Connecticut weathering a storm of religious and political upheaval. Ian M’Kethe is forced to make a choice in the face of enormous odds, as tensions mount between the colonists and the French with their Indian allies. Forging an unlikely friendship with Watookoog, an Indian, Ian risks everything and gains something he thought he had lost forever.

Guns of the Lion

Gavin Crookshank has his first taste of battle at sea when the HMS Lion engages in a death struggle with the French allies of Bonnie Prince Charlie. As a pawn in the hands of two opposing armies, he attempts to act with integrity in a chaos of loyalties during the bloody Jacobite Rebellion. Facing the noose of Bonnie Prince Charlie, or the dungeons of King George, which ruler will finally win his loyalty?

The American Revolution ignites a fire that rallies patriots to fight! Sandy M’Kethe, along with freeman Salem Poor, find themselves enlisted together in George Washington’s army. An expert marksman with the longbow, Sandy’s skill attracts the attention of the intrepid sea captain John Paul Jones. Sandy and Salem are bound for high-seas adventures. Together, can they navigate the guns of Providence?

“Here comes Douglas Bond—again—to say that those of us who love the truth, are not consigned to live lives of boredom and dullness. In The Faith and Freedom Trilogy, he’s got action from beginning to end. I wish I’d had this kind of book to read when I was a kid.” —Joel Belz, Founder, World Magazine

Douglas Bond is the author of a number of books of historical fiction and biography. He and his wife have two daughters and four sons. Bond is an elder in the Presbyterian Church of America, a teacher, a conference speaker, and a leader of church history tours. Besides The Faith and Freedom Trilogy he has written nearly a dozen books of historical fiction, with more sure to come!