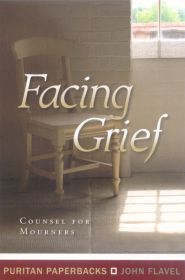 From a Puritan minister who faced many sufferings in his life, including the death of his first – and second wife, along with persecution, comes this volume of outstanding counsel, originally titled “A Token for Mourners.”

The work is intended to provide biblical comfort to ‘godly mourners’. This book is full of Scripture, counsel, warning, and wisdom gained from prayerful reflection on the personal experience of affliction in loss and grief.

For over 150 years Flavel’s Token for Mourners was printed and re-printed in England and America. The times demanded that the heart-breaking experience of the loss of children be faced by most parents. And generations of Christian parents found comfort through this little book.

A best-seller for more than 150 years in both Britain and America, this little book gave much comfort to generations of Christian parents who suffered the heart-breaking experience of the loss of children.

From the Foreword, by Pastor Mark Dever:

John Flavel (1627-91) was a minister of the gospel in the south of England – in Salisbury first, and then mainly in Dartmouth. Living through tumultuous times in England, Flavel faced even more tumultuous times in his own life. Like his Master, he lived a life acquainted with grief. He was one of the thousands of ministers of the Church of England who resigned their living in the Great Ejection of 1662. His parents both died of the plague in 1665 under tragic circumstances. (They were imprisoned by enemies at the infamously infected Newgate Prison, presumable in order to cause their deaths.)

Flavel saw the death of his child, and three wives. After only two years of marriage, his first wife, Joanna, died in childbirth, along with their first child. He remarried, and also grieved the loss of Elizabeth, his second wife. Having remarried again – to Agnes – he also lost her. He was survived by his fourth wife, Dorothy.

In 1674, two years after his second wife had died, John Flavel published A Token for Mourners, based upon advice he gave to a woman who had lost her only child. In this work, Flavel meditates on the words of Luke 7:13, ‘And when the Lord saw her, he had compassion on her, and said unto her, Weep not.’ From this verse Flavel helps the reader to think about sorrowing that it ‘moderate’ and ‘immoderate’. He spells out what is permitted and appropriate for a Christian, and what is not. He even has a section of advice to non-Christians who are mourning a loss.

I first became acquainted with this work when a couple in our congregation was called to go through the dark valley of losing their first child. Flavel’s Token helped them to trust God for good through the affliction and grief. It helped them to fix their eyes on Jesus, the Author and perfecter of their faith when they needed such help most.

A Valuable Work for Three Centuries

I had owned this work for decades – but it was hidden at the back of volume five of the collected Works of Flavel. I had read some of his more theological works, and the ‘Puritan Paperback’ edition of Flavel’s The Mystery of Providence – one of my favorite Puritan works. Now republished, this new edition makes Flavel’s Token for Mourners more accessible.

By publishing it separately, and in a lightly-edited form, it is allowed once again to take the form in which it knew such popularity among grieving Christians for 150 years – a small book, published on its own – the right size for carrying, and reading alone, slowly, and with meditation, reflection, and prayer. May reading these pages prayerfully remind you, believer, of our certain hope in Christ. May you be protected from danger as you are led to Christ during your time of grief. And may you embrace the promises that we have in Christ, and find your heart pastored by this faithful minister of God’s Word.
— Pastor Mark Dever, Capitol Hill Baptist Church, Washington, D.C.