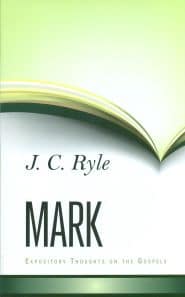 Temporarily Out of Stock – being reprinted.  Check back to see when.

Ryle’s Expository Thoughts on Mark do full justice to such an inspired text, and are full of encouragement, wisdom and straightforward practical application. May they continue to fulfill Ryle’s desire to lead the reader ‘to Christ, and to faith in him, to repentance and holiness, to the Bible and to prayer’.

Expository Thoughts on the Gospel of Mark

First published in 1857, Mark was the second book to appear in J. C. Ryle’s series of Expository Thoughts on the Gospels.

The earliest of the Gospel narratives to be written, Mark, says Ryle, ‘is singularly full of precious facts about the Lord Jesus, narrated in a simple, terse, pithy, and condensed style’. Those last four adjectives could well be used to describe Ryle’s own comments on the Gospel!

In one of the occasional explanatory notes, he quotes the following remarks of Rudolf Stier:

“St. Mark has the special gift of terse brevity, and of graphic painting in wonderful combination. While on every occasion he compresses the discourses, works, and history into the simplest possible kernel, he on the other hand, unfolds the scenes more clearly than St. Matthew does, who excels in the discourses. Not only do single incidents become in his hands complete pictures, but even when he is very brief, he often gives, with one pencil stroke, something new and peculiarly his own.”

These Expository Thoughts on Mark do full justice to such an inspired text, and are full of encouragement, wisdom and straightforward practical application. May they continue to fulfill Ryle’s desire to lead the reader ‘to Christ and faith in him, to repentance and holiness, to the Bible and to prayer’.

In 1841, Ryle was ordained as a minister in the Church of England. In his first position in a rural parish he developed the plain and direct style of communication that would mark his future ministry. He served at several churches for the next forty years, during which time he wrote hundreds of evangelistic tracts. He was a wildly popular writer. His tracts sold more than 12 million copies in his lifetime, and were eventually translated into about a dozen European and Asian languages.

While his ministry flourished, Ryle’s home life was challenging. In 1844, he married his first wife, who died in 1847. He married again in 1849. The couple was happy, but his wife’s health was poor, so the pastor seldom travelled and practically raised his children alone. When his second wife died in 1860, he became a single father with five children between 2 and 14 years old.

Despite these hardships, Ryle became a leader among the evangelical clergy in his day. In 1880, he was appointed the first bishop of the newly formed diocese of Liverpool. Because the diocese was new, it had no system of leadership, no formal administration. During his tenure as Bishop of Liverpool, Ryle raised enough funds to build 90 new houses of worship, ordained over 500 deacons, 500 ministers, and at least 45 salaried lay Scripture readers and 31 Bible women. He founded the Lay Helpers Association, an organization that oversaw Sunday schools, Bible classes, mission services, and cared for sick.