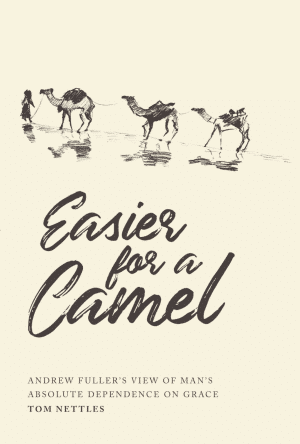 Easier for a Camel (Tom Nettles)

Easier for a Camel is a superb introduction for those who are unfamiliar with the real Andrew Fuller and his defense of those truths known as the doctrines of grace.

Easier for a Camel

The Calvinism of Andrew Fuller has been debated among Baptists for years.  Was he a Calvinist, or not?  Was he a ‘moderate’ Calvinist who believed in some points while rejecting others? Or was he a hyper Calvinist, as some claimed? In this brief treatment of Andrew Fuller, Thomas J. Nettles puts those questions to rest, using Fuller’s own ‘controversies’ to prove him a thoroughgoing Calvinist who also preached the necessity of repentance and faith.

Easier for a Camel is a superb introduction for those who are unfamiliar with the real Andrew Fuller and his defense of those truths known as the doctrines of grace.

Here you will find out in brief compass what Andrew Fuller actually believed about God’s sovereignty, human sinfulness, the extent of Christ’s atonement, and the free offer of the gospel. — Shawn D. Wright

Acclaimed as “the greatest theologian of the late 18thcentury transatlantic Baptist community,” he left an indelible mark upon his generation as one most eminently gifted by God, to enter theological controversy with an aptness, prudence, and pastoral skill which left the church on all sides seeing the Gospel with greater clarity. —Kurt M. Smith

Few writing pastors in church history have better expressed the depths of their sin and the height of God’s grace quite like Andrew Fuller, a towering figure on the landscape of our Baptist heritage. —Jeff Robinson