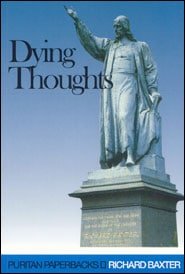 Written in the final weeks of his own life, Puritan Richard Baxter has written the most searching, personal examination of the soul, for any person who feels the tension the Apostle Paul spoke of when he wrote in Philippians that he felt very much pulled in two directions – having a desire to remain in this world and labor on, for others, or a desire to depart and be with Christ, which is far better (Phil. 1:23).

Richard Baxter wrestles openly, before the reader, with his own doubts and fears, anxious to prepare his soul as he faces eternity.

Written in the final weeks of his own life, Puritan Richard Baxter has written the most searching, personal examination of the soul, for any person who feels the tension the Apostle Paul spoke of when he wrote in Philippians that he felt very much pulled in two directions – having a desire to remain in this world and labor on, for others, or a desire to depart and be with Christ, which is far better (Philippians 1:23).

More well known for his Reformed Pastor, Richard Baxter was the outstanding and devout pastor of the village of Kidderminster. Dying Thoughts is an abridged version in which Benjamin Fawcett reduced the original work for us.  As he wrote in the introduction, ‘The Dying Thoughts of Mr. Baxter chiefly present to our view what every Christian may attain, and what it is the highest interest, as well as the indispensable duty of every Christian to aspire after.’

Baxter wrestles openly before the reader with his own doubts and fears as he faces eternity.  He is  jealously examining his own heart, anxious to test his own sincerity, taking nothing for granted. Baxter wanted to die with every grace in his soul in full vigor. A man of like passions as ourselves, his Dying Thoughts provides much needed counsel, strength and comfort because it deals with the same conflicts, complaints and desires which fill our own hearts.

Richard Baxter never received a higher commission than that of parish pastor to loom workers in Kidderminster. Still, he was the most prominent English churchman of the 1600s. He was a peacemaker who sought unity among Protestants.  Yet Baxter was a highly independent thinker and at the center of every major controversy in England during his lifetime.

A Nonconformist who sought unity

Born in Rowton to parents who undervalued education, Baxter was largely self-taught. He eventually studied at a free school, then at royal court, where he became disgusted at what he saw as frivolity. He left to study divinity, and at age 23, he was ordained into the Church of England.

Within the Anglican church, Baxter found common ground with the Puritans, a growing faction who opposed the church’s episcopacy—and was itself breaking into factions.

Baxter, for his part, did his best to avoid the disputes between Anglicans, Presbyterians, Congregationalists, and other denominations, even convincing local ministers to cooperate in some pastoral matters. “In necessary things, unity; in doubtful things, liberty; and in all things, charity,” he was fond of saying.

The interest in cooperation was not due to a lack of conviction. On the contrary, Baxter was opinionated in his theology, which was not quite Separatist and not quite Conformist. Among his more than 200 works are long, controversial discourses on doctrine. Still, he believed society was a large family under a loving father. So, in his theology, he tried to cut between extremes. He eventually registered himself as “a mere Nonconformist” (“Nonconformist” was a technical term meaning “not Anglican”), breaking with the Church of England mainly because of the lack of power it gave parish clergy.

Baxter also found himself as a peacemaker during the English Civil Wars. He believed in monarchy, but a limited one. He served as a chaplain for the parliamentary army, but then helped to bring about the restoration of the king. Yet as a moderate, Baxter found himself the target of both extremes.

He was still irritated with the episcopacy in 1660, when he was offered the bishopric of Hereford, so he declined it. As a result, he was barred from ecclesiastical office and not permitted to return to Kidderminster.  Nor was he allowed to preach. Between 1662 and 1688 (when James II was overthrown), he was persecuted and was imprisoned for 18 months.

Still, he continued to preach: “I preached as never sure to preach again,” he wrote, “and as a dying man to dying men.”

Baxter became even better known for his prolific writing. His devotional classic The Saints’ Everlasting Rest was one of the most widely read books of the century. When asked what deviations should be permitted from the Anglican Book of Common Prayer, he created an entirely new one, called Reformed Liturgy, in two weeks. His Christian Directory contains over one million words. His autobiography and his pastoral guide, The Reformed Pastor, are still widely read today.

“The Gospel dieth not when I die: the church dieth not: the praises of God die not: the world dieth not: and perhaps it shall grow better,” he wrote near the end of his life. “It may be that some of the seed that I have sown shall spring up to some benefit of the dark unpeaceable world when I am dead.”