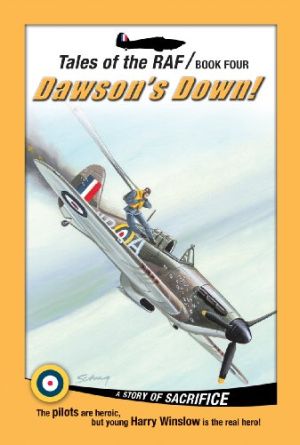 Dawson’s Down! Tales of the RAF

A bad dream causes young Harry to spend the night tossing and turning in his bed. Unfortunately, the next day becomes the real nightmare – his friends are in trouble! Harry wants to help, but what can a young boy do? He learns what it really means to make sacrifices and help others.

Tales of the RAF

A bad dream causes twelve year old Harry Winslow to spend the night tossing and turning in his bed. Unfortunately, the next day becomes the real nightmare.  Harry’s friend, Erin, learns her father is missing in action.  At the same time, Squadron leader Captain Dawson is forced to bail out of his Hurricane while fighting the enemy over the English Channel.

Sometimes sacrifices must be made to help others, especially during a time of war. Harry is willing to help, but what can a young boy do to make a difference?

Join Harry on the airfield while he tries his best to help Captain Dawson and Erin’s father. Hopefully there is someone who can save his special friends. These are ordinary men who do extraordinary things – the types of things that make men heroes.

Other Volumes in the Tales of the RAF Series

These are the stories of young Harry Winslow and his friendships with the pilots of the Royal Air Force in World War II England. Written for boys but appealing to all, the tales are based on history and depict values such as courage, heroism, and responsibility.