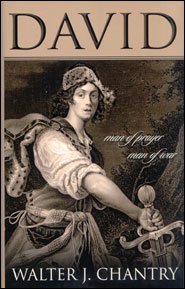 Only our incredible God could have forged a man like David, the shepherd boy who became king of Israel. He embodied all the qualities of manly nobility and charm. Everyone in his day loved David, except the most wicked and jealous persons; and no matter how high David rose in authority over men, his spirit remained childlike toward the Lord.

He who was equally at home holding the shepherd’s staff, the warrior’s sword, the poet’s harp, and the ruler’s scepter, was, most of his life, entirely transparent in humbling himself before the God of all the earth.

Man of Prayer, Man of War

Only the supreme providence of God and the unfathomable depths of divine grace could have conceived and forged the life of David. God made the son of Jesse into the emblem of the kingly office which only Christ would fulfill more gloriously. He embodied all the qualities of manly nobility and charm. Everyone in his day loved David, except the most ugly and despicable figures. David: Man of Prayer, Man of War is the finest exploration of David’s life written in the last 100 years.

No matter how high David rose above other men, his spirit was childlike toward the Lord. He who was equally at home holding the shepherd’s staff, the warrior’s sword, the poet’s harp, and the ruler’s sceptre, was completely transparent in the humbling of himself before the God of all the earth. This ease and simplicity in worship draws out our deepest emotions as we read the life of David, King of Israel. We love this man for showing us how to pray from every point of life’s compass. We love him for showing us how, in the midst of spiritual failure, we too can draw near to the Lord again in trust and devotion.

Perfectionists will not be comfortable with David. Those who stumble often, but who always turn with melted hearts to God for pardon and help, will find in him a brother for all situations. Such people will love the sacred history of his life and find it totally engrossing.

Walt Chantry was born in 1938 in Norristown, Pennsylvania. He was raised in the Presbyterian Church and was converted to Christ as a teenager. He graduated from Dickinson College in 1960 with a B.A. in History, and went on to receive a B.D. from Westminster Theological Seminary in 1963.

That same year he was called to be pastor of Grace Baptist Church in Carlisle, Pennsylvania where he served the Lord for the next 39 years. He is author of several books, including The Shadow of the Cross and Signs of the Apostles.

Soon after his retirement in 2002 he was asked to be the editor of The Banner of Truth magazine and continued in this ministry for seven years. Walt and his wife Joie now reside in Waukesha, Wisconsin.