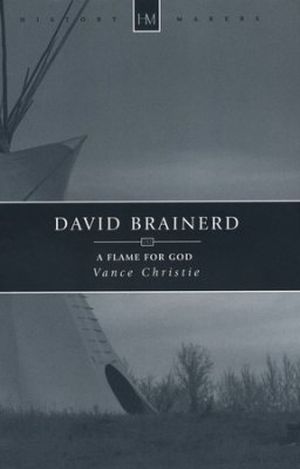 Get acquainted with a man who longed to be “one continued flame for God”! Despite battling depression and tuberculosis, Brainerd followed his calling to minister to Native Americans and was blessed to witness spiritual revival before his death at age 29. Christie’s colorful account will resound with readers 12 and up. Foreword by John MacArthur.

A Flame for God

“…I hardly ever so longed to live to God and to be altogether devoted to Him; I wanted to wear out my life in his service and for his glory …”   — David Brainerd

With an Introduction by John MacArthur.

David Brainerd was devoted to live for his Lord. He lived a short life but in his four years as a missionary he was blessed with a period of revival amongst the Indians to whom he had been ministering. By considering the life of Brainerd this book will be of tremendous spiritual benefit to you as you read of a young man plagued with depression and yet made so effective under God.

Vance Christie is a pastor and author best known for vivid retelling of missionary stories. He lives in Aurora, Nebraska and has previously written for the ‘Heroes of the Faith’ series.

“The poor man was sick, and his devotion to Christ and his self-sacrificial labours among indigenous Americans stand as a testimony to what God can do through weak and damaged people. And the story is not by any means all bleak; Brainerd certainly knew times of real closeness to God, and saw touches of revival in his ministry.”  — Evangelicals Now

“Vance Christie has given us a thorough, engaging, meticulously documented but wonderfully readable chronicle of the life of David Brainerd. Christie makes Brainerd live and breathe for the twenty-first century reader in a vivid, colorful account of the young man’s heart, mind, and work. This is a splendid volume, full of insight into what drove Brainerd to give his life in the Lord’s service—despite several obstacles that would seem insurmountable to the typical person today.” — John MacArthur, President, The Master’s University and Seminary and Pastor-Teacher, Grace Community Church, Sun Valley, California