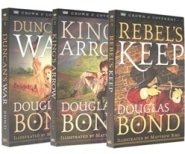 All 3 volumes of Douglas Bond’s Crown & Covenant Series which revolve around the character of a Scottish boy during the covenanter era. Weaves the stories of John Knox & Samuel Rutherford into these historical fictions of Henty quality.

The Crown & Covenant Series follows the lives of the M’Kethe family as they endure persecution in 17th–century Scotland. Douglas Bond weaves together fictional characters with historical figures from the exciting and courageous history of the Scottish Covenanters.

Young Duncan M’Kethe finds himself caught in the web of Sir James Turner, the former Covenanter turned military leader of the persecutors. Duncan is torn by his hatred of Turner’s dragoons, who have treated his friends cruelly, and his father’s instructions to love them. He must be true to Jesus Christ while attempting to rescue his father from enemy hands.

Angus M’Kethe, a ready archer, guards sheep from scavenging crows. Loyal to his family, Angus must match wits in a life-and death struggle against Highlanders. By faith, Angus turns his beloved game of chess into a tool of victory. But desperate fear grips the Clan with an unexpected murder! Will Covenanters be found guilty? Angus’s true test of manhood and marksmanship will come at the Battle of Drumclog!

Brothers Duncan and Angus team up again to stand for the Covenanter’s cause and fight the king’s injustice. Will they be forced to flee to America, leaving behind their beloved homeland? Or will they save the home and land they love?

Rebel’s Keep concludes the Crown & Covenant series with a new, high-intensity adventure. Set in 17th-century Scotland, in the midst of the brutal persecutions of King Charles II of England, Rebel’s Keep follows the history after Duncan’s War and King’s Arrow and picks up the historical thread just before the devastating defeat of the Covenanters at Bothwell Brig, 1679.

Douglas Bond is the author of nearly 30 books of historical fiction and biography. He and his wife have two daughters and four sons. Bond is an elder in the Presbyterian Church of America, a teacher, a conference speaker, and a leader of church history tours. Other writings of Bond’s include: