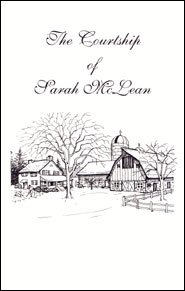 A 19-year old girl longing for marriage learns, over a 2-year period, to trust her parents and her God for guidance about her future. Each of the Castleberry Courtship fictions make a helpful and engaging introduction to the concept of courtship for children ages 10-15.

The Courtship of Sarah McLean

A 19-year old girl longing for marriage learns, over a 2-year period, to trust her parents and her God for guidance about her future. Each of the Castleberry Courtship fictions make a helpful and engaging introduction to the concept of courtship for children ages 10-15.

This book is part of The Courtship Series, other volumes of which include:

“Okay, can I just say, that this is an amazing book? It was so good, and had an accurate portrayal of Biblical courtship.

My parents have decided that courtship is the best way of action for us (their children) and I was happily amazed to find a good, sound book that shows this. It showed Sarah’s struggles and triumphs, which I thought was a great thing. I would not say that it was un-realistic in any way at all; I know many people who have the same standards as Sarah and her family. It was a blessing to see how Sarah and her siblings helped out around the house with a good attitude.

I appreciate the good message that this book gives; I have to say that it is the first book I have found like it (which is pretty sad).” — from Leona Ruth, posted at GoodReads, September 16, 2017

About the Castleberry Family

We’re a Christian family of ten – Dad, Mom, and eight children. The difference in age from our oldest to youngest is 19 years. We have homeschooled each of our children throughout their school years, and we love the closeness and blessing that it has brought to all of us. In 1992, the Lord moved us to this farm in northern Wisconsin, and we have so enjoyed learning and growing together here.

Steve is a marketing professor at the University of Minnesota in Duluth, about a 40 minute drive from the farm. He and Susie his wife decided to start writing about some of their humorous experiences in farm life and turning them into stories. And the rest is history — soon the stories began to take shape as The Farm Mystery Series, after which they also began to write The Courtship Series, of which The Courtship of Sarah McLean was the first volume.