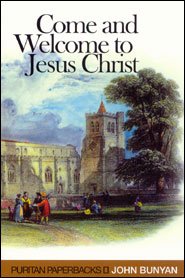 Of all writings of John Bunyan, this most fully expresses his joy in the gracious offer of God to sinners, in Christ – to receive all sinful men! Have you had doubts about whether you could be received, due to the greatness of your sins?

This book means to encourage all great sinners and backsliders, in typical Puritan form, by expounding from all of Scripture the truth of John 6:37: “All that the Father giveth me shall come to me; and him that cometh to Me, I will in no wise cast out.”

Bunyan labors in this book not only to explain the meaning of the text of Scripture, but from there to remove the doubts and difficulties of sinners and backsliders in their approach to Christ.

Come and Welcome to Jesus Christ

This work could be said to have given rise indirectly to the modern missionary movement, since it strongly influenced Andrew Fuller, the first secretary of the pioneering Baptist Missionary Society, and helped him to set his denomination free from the grip of hyper-Calvinism. It is a Christian classic that deserves a wide modern readership.

Of all John Bunyan’s writings, Come and Welcome to Jesus Christ most fully expresses his delight and joy in the free and gracious welcome given to sinners by Jesus Christ.

It is a thorough exposition of John 6:37: All that the Father giveth me shall come to me; and him that cometh to me I will in no wise cast out. Bunyan not only explains the meaning of the terms used in the text, but also labours to remove the doubts and difficulties of sinners and backsliders in their approach to Christ.

John Bunyan (1628-1688) was born at Elstow, England, about a mile from Bedford, and became one of the most influential authors of the seventeenth century. Few writers in history have left such a wealth of Christ-centered writings.

Bunyan’s moving conversion is recorded in his Grace Abounding to the Chief of Sinners. While walking the streets of Bedford, Bunyan heard “three or four poor women” sitting at a door, “talking about the new birth, the work of God in their hearts, and the way by which they were convinced of their miserable state by nature. They told how God had visited their souls with His love in Christ Jesus, and with what words and promises they had been refreshed, comforted, and supported against the temptations of the devil.”

From these godly women Bunyan learned to despise sin and to hunger for the Savior. Later, while passing into the fields, he recounts, “This sentence fell upon my soul, ‘Thy righteousness is in heaven’…for my righteousness was Jesus Christ Himself, the same yesterday, today, and forever.” Then “his chains fell off,” and he went home rejoicing.

In 1655, Bunyan was called to preach the Gospel of Jesus Christ. Bunyan was arrested November 12, 1660, for preaching without the approval of the Anglican Church. He was charged with “teaching men to worship God contrary to the law” and was in jail more than twelve years.

His most well-known work, The Pilgrim’s Progress, was written while in the Bedford jail. During Bunyan’s lifetime there were 100,000 copies circulated in the British isles, besides several editions in North America. It has been continuously in print since its first printing. Bunyan’s remarkable imagery was firmly rooted in the Reformation doctrines of man’s fallen nature, grace, imputation, justification, and the atonement–all of which Bunyan seems to have derived directly from Scripture.

Other writings of Bunyan found at Grace & Truth Books: