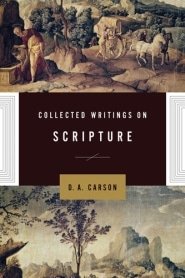 God’s Word has always had enemies, but in recent years the inspiration and authority of Scripture have been attacked with renewed vigor. Respected scholar D. A. Carson has written widely on the nature of Scripture over the past thirty years, and here presents a timely collection of his work in two parts.

God’s Word has always had enemies, but in recent years the inspiration and authority of Scripture have been attacked with renewed vigor. Respected scholar D. A. Carson has written widely on the nature of Scripture over the past thirty years. Here, he presents a timely collection of his work in two parts.

In part 1, Carson selects essays written on such themes as how to interpret the Bible, recent developments in the doctrine of Scripture, unity and diversity in the New Testament, and redaction criticism. Presenting a theologically balanced and confessional perspective, Carson defines the terms of a number of debates, critiques interpretive methods and theories, and suggests positive guidelines for future action.

This volume is a diverse collection that will prove to be a helpful resource to both seasoned pastors and scholars and those who are just starting serious study of the Bible.

Reviews of Books on the Bible

“This book is a road map of pathways to pursue and pitfalls to avoid in handling Scripture. D. A. Carson would be the first to agree that God himself upholds his written word, the Bible. But God uses means. In recent decades, Carson’s voice has been among the most forthright, consistent, rigorous, faithful, and compelling in serving the vital divine end of testifying to Scripture’s veracity. This book guides readers to the priceless destination of confidence in God’s Word through refutation of its critics and commendation of its truth.”
— Robert W. Yarbrough, Associate Professor of New Testament, New Testament Department Chair, Trinity Evangelical Divinity School

“D. A. Carson is one of the most prolific and profound biblical scholars of our generation. Perhaps it is not far-fetched to predict that his Collected Writings on Scripture will become a classic as an evangelical defense of Holy Scripture’s authority. Carson courteously but persuasively reveals the weaknesses of arguments designed by critics to discredit or render obsolete the historic teaching of the Western Christian churches, namely, biblical inerrancy. This book is a masterful, must read for those persons who want to understand better the nature of Scripture’s authority. The volume may very well take its place as a benchmark study, side by side with Inspiration (1881), the influential essay penned by A. A. Hodge and B. B. Warfield.”
— John D. Woodbridge, Research Professor, Church History and History of Christian Thought, Trinity Evangelical Divinity School