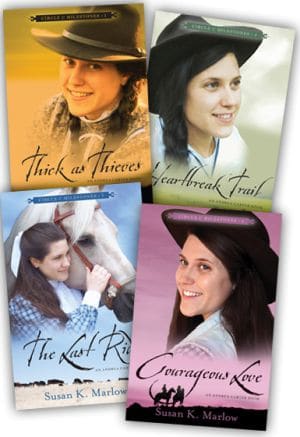 Includes all 4 of the Andrea Carter Circle C Milestones stories:

Fourteen-year-old Andrea Carter would rather ride her beloved palomino, Taffy, than do anything else. But life on the Circle C ranch in 1882 is busy. Between school and chores, Andi is left with little time to prepare for Taffy’s first foaling. Then when the event finally arrives, it nearly ends in disaster.
Returning to school keeps Andi hard-pressed to find time for foal training. And she now has a new problem on her hands–Macy Walker, who has been assigned as Andi’s seatmate. The new girl’s crude manners and cruel behavior bring storm clouds into Andi’s life, as does the news that cattle rustlers have moved into the valley.

When the cattle rustlers turn to stealing horses and strike the Carter ranch, Andi’s only hope for recovering her precious colts lies with Macy. Can Andi trust this wild girl? Does she have a choice?

Andrea Carter can ride, rope, and cut out cattle with the best of her brothers’ ranch hands. Yet, her mother has always held the family’s youngest daughter back from fully participating in ranch activities.

With the approach of her 15th birthday, even the ranch boss, big brother Chad, can’t deny that his baby sister is better at ranch skills than some of his cowhands. When Andi announces that her quinceañera birthday wish is to join the upcoming cattle drive, her family is stunned.

But after further discussion and multiple newspaper clippings about spirited women who balked at society’s expectations, even Mother agrees that the only way to get this cattle-drive notion out of Andi’s head is by letting her and her cousin Levi go along as Cook’s helpers. Andi is elated. What can go wrong on a two-week drive to Los Angeles?

Andi’s newest adventure may be more than she can handle–even with her family’s help.

Andrea Carter is turning “sweet 16” and life could not be better. She’s about to finish school, her sister Melinda is getting married, and her older brother Justin has a new baby to spoil. There will be plenty of time to work with the colt of her treasured palomino horse, Taffy, and best of all, Andi will finally get to work full-time for the ranch she loves.

There’s just one problem: a city-slicker cousin named Daniel. Left there by his father, with a cryptic warning that New York City life has done damage to the young man’s character, Daniel wants nothing to do with the ranch. He ignores Andi’s lessons, walks away from responsibility, wrecks valuable equipment, and even runs away to San Francisco.

Andrea Carter is finally pulling her own weight on the Circle C Ranch she loves. The only thing she loves more than helping to run the ranch is spending time racing and stunt-riding on her horse Shasta, with the help of wrangler Riley Prescott. Little does she know that when she and Riley stumble onto a mysterious cut in the fence around her brother’s prize calves, life is about to get far more exciting–and dangerous.

A cryptic warning tied around a brick crashes through the window at a family party. Then cattle begin to die. When the horse barn catches fire, Andi knows this is more than just coincidence. But who is trying to hurt her family–and why? Evidence begins to point to criminals from her brother Justin’s past who want revenge. But that discovery may be too late to keep Andi and her brother’s family out of danger.