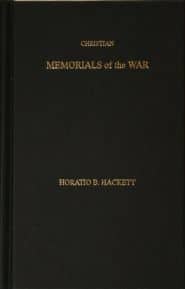 Christian Memorials of the War (Horatio B. Hackett)

Testimonies of faith and lives of godly men in the Union Army, during the War Between the States.

Christian Memorials of the War

Or, Scenes and Incidents Illustrative of Religious Faith and Principle, Patriotism and Bravery in Our Army. With Historical Notes

A volume of testimonies of faith and lives of godly men in the Union Army, during the War Between the States.

Horatio B. Hackett (1808-1875) served as Professor of Biblical Interpretation and Literature at Newton Theological Institution. He was also the author of Illustrations of Scripture and Commentary on The Acts of the Apostles.  Of Hackett, a colleague of his at the seminary, Charles L. Congdon, wrote:

“In Dr. Horatio B. Hackett we had a classical teacher of distinguished abilities and accomplishments…. I used to think him a man of the sixteenth century. He should have been employed in that kind of mastodonian annotation which swelled the spare remains of Velleius Paterculus into a chubby quarto of a thousand pages. Perhaps it was not altogether our fault if we could not relish the discussion of a disputed reading of Livy or of Tacitus as he relished it. He lived for learning, but he conscientiously gave all his great acquisitions to the cause of sound Christian knowledge. As he was accuracy itself, he occupied a high position among the American reviewers of the English Bible, and I suppose he went on toiling to the last.”