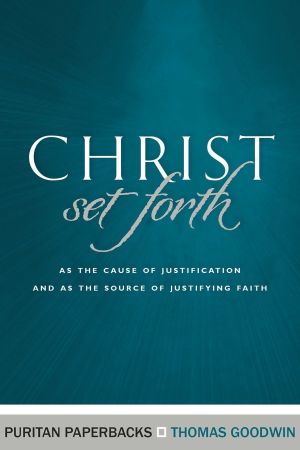 First published in 1642, Christ Set Forth — one of Thomas Goodwin’s most beloved and enduring works — is a book full of theological riches and penetrating pastoral insights. Addressing, from an exposition of Romans 8:34, the pastoral problem that many believers stray in their faith by looking into their own hearts for signs of grace instead of looking away from themselves to Christ, Christ Set Forth is primarily a book written to encourage Christians.

First published in 1642, Christ Set Forth — one of Thomas Goodwin’s most beloved and enduring works — is a book full of theological riches and penetrating pastoral insights.  Goodwin starts with an exposition of Romans 8:34.  From there, he explores the pastoral problem that plagues many believers as they look into their own hearts for signs of grace instead of looking away from themselves to Christ.  Goodwin wrote Christ Set Forth primarily to encourage Christians. As Scott Berggren says in the Foreword:

“It is a guidebook for keeping one’s heart and faith pointed in the right direction, towards Christ himself. In it Goodwin pushes aside anything that might displace Christ in one’s heart. In chapter after chapter, Goodwin beautifully presents the glory of Christ and his work as mediator as the only object of one’s faith and affection.”

‘Turning to nearly any page in this volume, readers will be rewarded with a remarkably pastoral theology of justification by grace alone through faith alone in Christ alone.”

— Michael Horton, Professor of Theology and Apologetics, Westminster Theological Seminary, California, and author of Putting Amazing Back Into Grace

Thomas Goodwin (1600-1680) was one of the foremost Puritans and needs no commendation from us. In an age of much superficiality we could do little better than acquaint ourselves with such writers. By 1634, Goodwin forsook “high church” practices among Anglicans and resigned his post and left Cambridge to become a Separatist preacher. By the end of the decade he was with other Nonconformist exiles in Holland. Then, in 1641, Parliament invited all such Nonconformists to return. Soon, Goodwin was leading the ‘dissenting brethren’ at the Westminster Assembly.