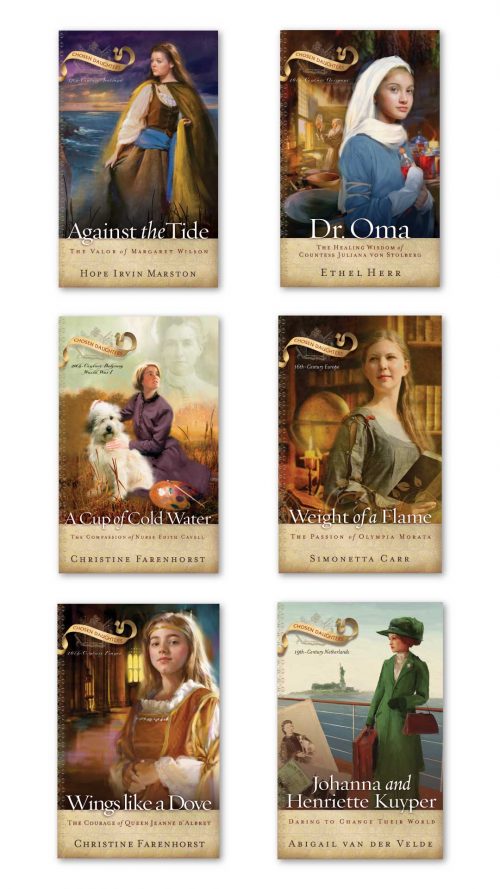 Six outstanding biographies which girls will deeply enjoy, while learning the stories of great women in Christian history.  Buy as a set for a reduced price!

Details on each of The Chosen Daughters volumes:

Johanna and Henriette Kuyper: Daring to Change Their World

As the 1800s draw to a close and a new century begins, forces for change are already at work in the Netherlands’ entrenched society when custom is further challenged by two bold women, Johanna Kuyper and her daughter Henriette.

Risking reproach and defying custom, both will find very different ways to change their world for good and for God’s sake.

Weight of a Flame: The Passion of Olympia Morata

5th volume in the Chosen Daughters Series! One of the best series ever written, to acquaint a girl with important and zealous women in Christian history.  Psalm-Singer, Passionate Teacher, Pilgrim Adventurer — Olympia Morata (1526–1555) was a girl far ahead of her time and every teacher’s best student. A quick tongue and a ready pen are her mind’s tools to record her vivid thoughts, poetry, songs, and opinions.

Appointed to be the tutor to Duchess Renée’s children, Olympia’s future looks bright — when suddenly, evil rumors turn her world upside-down. In the midst of it all a young doctor comes courting. Will she survive the danger waiting on the other side of the Alps?

Wings Like a Dove: The Courage of Queen Jeanne d’Albret

Born in 1528, Jeanne d’Albret is the only daughter of the King and Queen of Navarre. Standing with her beloved Huguenots, Jeanne steps onto the battlefield of history during the tumultuous Reformation (1517-1559). As deadly political events swirl around her tiny kingdom of Navarre, Queen Jeanne is forced to choose between serving Christ or succumbing to the world. Will she help the oppressed and persecuted Christians, or will she deliver her own life?

“A compelling look at the one of the heroic women of the Reformation! A book that transports you back in time, to an age filled with immense dangers and challenges to those who loved God. I couldn’t put it down!” — Diana Waring

Juliana von Stolberg (1506-1580), the Queen Mother of the Netherlands, is cherished by the Dutch people as a wise and gifted healer. She gains an able apprentice when her granddaughter Maria comes to live with her. While Maria learn to put her trust in God, her father, the courageous William of Orange, fights to free Holland from Spanish rule. Author Ethel Herr is a writer, teacher, historian and author of Reformation fiction books known as the Seekers Series. She is an active member of the Institute for Historical Studies and teaches seminars on writing and research.

Against the Tide: The Valor of Margaret Wilson

With a setting in 17th-century Scotland, a place of cruel intolerance for the Covenanters, this young, earnest disciple – Margaret Wilson – finds her pledged loyalty to Christ challenged by King Charles II’s demand for her absolute obedience. Will Margaret choose to defy the authorities who call for what only God has a right to?

“The difficult age of the Scottish Covenanters comes startlingly to life in this volume. Hope Marston has captured all the drama and adventure, tension and intrigue, courage, faith and endurance of those “Killing Times’ (as they were so known) when both the integrity of the gospel and the prospects of freedom were very much at stake.”
— George Grant, Pastor, Parish Presbyterian Church, and President of Franklin Christian School

A Cup of Cold Water: The Compassion of Nurse Edith Cavell

A blend of artistic craft and scholarly research bring Edith Cavell to life. Edith fulfills the hopes of her earthly father that she would grow up to serve God in some special way. But more importantly, her faith points to a heavenly Father who directs and plans lives for His glory. A young woman finds herself, in God’s providence, director of a nursing school in Belgium. Soon, she is just as shockingly caught up in the turmoil of World War I. Surrounded by enemy spies, Edith courageously continues to serve the Allied soldiers who desperately need her help.