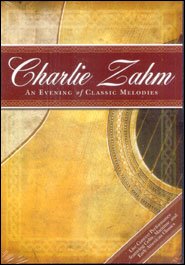 An Evening of Classic Melodies

A live concert performance, featuring a wide historical range of Celtic, Maritime, and Early American Classics Songs. It brings back to your family music that will encourage families to gather, celebrate, sing, and rejoice together.

Songs on the DVD include:

– Loch Lomond
– Scotland the Brave
– The Minstrel Boy
– Be Thou My Vision
– Poor Wayfaring Stranger
– Out on the Mira
– Follow Me up to Carlow
…and many more!

Charlie Zahm is one of the most popular soloists at Celtic music festivals, Maritime, and American Traditional music events anywhere east of the Mississippi. With a baritone voice some have described as “coming along once in a generation,” Charlie has become one of the most successful performers on the Celtic festival circuit, weaving magical moments of Scottish and Irish history for the listener and viewer, with passion for the performance and a chosen repertoire pleasing to all members of the family. A master of the guitar as well, Charlie brings an authentic love and respect for the music he sings-and with dashes of humor and a light in his eyes, he will draw you into the stories of his songs!

When Charlie was old enough to sing, he began appreciating the beautiful Celtic songs and melodies he first heard in the largely Scottish province of his mother’s birth, Ontario, Canada. Keenly aware of his own heritage, which includes healthy doses of Scottish and Irish blood on both sides of his family, Charlie has collected several hundred popular (as well as beautiful and obscure) selections and now performs them for thousands of fans up and down the Eastern Seaboard and across America. Today, as one of the most sought-after Celtic singers on the East Coast (he is one of the few singers in the world to be invited to sing live twice with Scotland’s “Black Watch”), Charlie performs regularly everywhere from concerts and festivals to television shows and Celtic-themed Caribbean cruises, where his 6’4″ frame and powerful baritone make him one of the most memorable performers around.