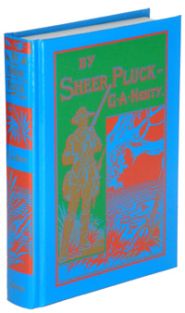 By Sheer Pluck: A Tale of the Ashanti War (G. A. Henty)

In this volume, author Henty actually draws upon his own personal experiences as a correspondent, during the first Ashanti War, to create an adventure story about Frank Hargate, an intrepid young naturalist being held hostage by the king of the Ashantis.

A Tale of the Ashanti War

In this volume, author Henty actually draws upon his own personal experiences as a correspondent, during the first Ashanti War, to create an adventure story about Frank Hargate, an intrepid young naturalist being held hostage by the king of the Ashantis.

The author has woven, in a tale of thrilling interest, all the details of the Ashanti campaign, of which he was himself a witness. His hero, after many exciting adventures in the interior, is detained as a prisoner by the king just before the outbreak of war, but escapes and accompanies the English expedition on their march to Coomassie.