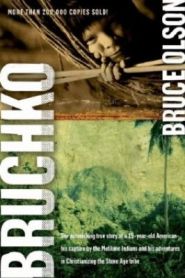 The astonishing true story of a 19-year-old American-his capture by the Motilone Indians and his adventures in taking the Christian faith to a stone-age tribe.

What happens when a nineteen-year-old boy leaves home and heads into the jungles to evangelize a murderous tribe of South American Indians? For Bruce Olson, it meant capture, disease, terror, kidnapping, loneliness, and torture. But what he discovered by trial and error has revolutionized then world of missions.

The Astonishing True Story of a 19-Year-Old American, His Capture by the Motilone Indians and His Adventures in Christianizing the Stone Age Tribe

The astonishing true story of a 19-year-old American-his capture by the Motilone Indians and his adventures in taking the Christian faith to a stone-age tribe.

What happens when a nineteen-year-old boy leaves home and heads into the jungles to evangelize a murderous tribe of South American Indians? For Bruce Olson, it meant capture, disease, terror, kidnapping, loneliness, and torture. But what he discovered by trial and error has revolutionized then world of missions.

Bruchko – a book which has sold more than 300,000 copies worldwide, has been called “more fantastic and harrowing than anything Hollywood could concoct.” Living with the Motilone Indians since 1961, Olson has won the friendship of the tribal people and at the same time, known four presidents of Colombia on their behalf.  He has made appearances before the United Nations because of his efforts.

Bruchko includes the story of his 1988 kidnapping by communist guerrillas and the nine months of captivity that followed. This revised version of Olson’s story will amaze you and remind you that simple faith in Christ can make anything possible.

“An all-time missionary classic. Bruce Olson is a modern missionary hero who has modeled for us in our time the reaching of the unreached tribes.”  —- Loren Cunningham Co-founder, Youth With A Mission

In 1961, at age 19, Bruce Olson bought a one-way ticket to South America.  He traveled into the uncharted jungles of northeast Colombia.  There, 45 years ago, he found the Motilones, a fierce, primitive Indian tribe.

The Motilones called him “Bruchko” because that is how they pronounced his name.  Though Olson had no official sponsorship from a missions board or organization, in the ensuing years, he established medical clinics and schools for the tribe.  He has translated Scripture into their language.  And he has led many of them in knowing Christ as their Lord and Savior.

The small yet volatile country of Colombia has long been plagued with escalating problems, including revolutionary uprisings and plundering by drug barons. In the midst of the danger, the turmoil and the cocaine trafficking, Olson has quietly and effectively won the love and respect of the Motilones, and in fact, the entire nation.  In his book titled Bruchko, Olson tells the story of his early years of ministry in Colombia.

Olson lived and worked with the Motilones until October 1988 when the shocking news came: He had been captured by a band of guerrilla terrorists intent on controlling Motilone territory as part of their strategy for revolution.  He would face torture and death threats. He was in captivity for nine months.  During that time he was faced with a firing squad, only to find that the bullets were blanks in an attempt to break him, but it didn’t work.

One of the guerrilla leaders, Federico, told him that he was released.  He told Olson that they had made a mistake when they captured him.  He went on to say, “It’s an embarrassment to us that you’ve been held in our camps.  If we’ve mistreated you we hope you can find the greatness to forgive us.  We’ve decided to leave the Motilones as an autonomous people.  We will leave them alone, and you many continue your work among them as before.”

Olson led many of the guerrillas to the Lord.  Olson is thankful that God was quietly working out His sovereign will, not only in his life, but in the lives of everyone involved: the Motilones and other tribal peoples, the people of Colombia, the guerrillas, and indeed, people all over the world.

The work continues today.  More than 30 professionals have graduated from Colombian universities, among which are physicians, accounts, translators, Bible scholars, forest rangers, agronomists, and more than 400 as technical apprentices and high school graduates.  All the students are back among their respective communities sharing the expertise of their newly acquired knowledge.