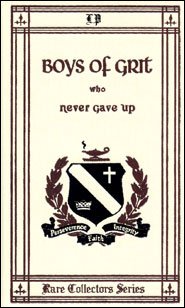 Boys of Grit Who Never Gave Up (Elsie Egermeier)

Boys of Grit Who Never Gave Up

The 3rd volume in the Boys of Grit set

You can measure the strength of a man by measuring what it takes to stop him. Thomas Edison always viewed failure as being one step closer to success. The eighteen men whose lives are put on display in Boys of Grit Who Never Gave Up did not let failures stop their pursuit of success and excellence. Learn about the determination needed to invent the phonograph or the persistence required to bring the modern telephone and the automotive assembly line into existence.

The Wright Brothers, D. L. Moody, and Louis Pasteur are just a few of the names that will inspire young people to attempt great things and to see failure as a stepping stone to success.

Here are stories of young men who overcame great obstacles in life, to become men of significance. Boys of Grit Who Never Gave Up covers the lives of:

“At the age of seven, my teacher thought I was a dunce and requested that I be removed from the school. But my mother believed that God had a special plan for me. Though I did not have my mother very long, she cast over me an influence which lasted all my life…If it had not been for her faith in me at a critical time in my experience, I should very likely never have become an inventor.”  — Thomas Edison

Other volumes in the Boys of Grit set are:

“I really liked the book because even though they were poor and not well educated, these boys never gave up on their dreams. They worked hard to see their dreams come true.” — Janice Robinson of Neosho, Missouri