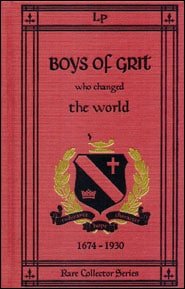 Boys of Grit who Changed the World (Archer Wallace)

This inspiring book will give any boy or girl hope, courage, and the motivation that they too can become all that God desires them to be.

Boys of Grit Who Changed the World

It’s so encouraging to read about someone who overcame overwhelming obstacles to achieve success and honor. The human spirit loves to cheer and applaud valor, heroism, perseverance, and victory. In this 2nd volume of the Boys of Grit series, you’ll read the life stories of men who did just that.

Did you know that a simple blacksmith mastered twenty foreign languages primarily because he valued every spare moment of his time? Discover the accomplishments of a highly motivated young man whose entrepreneurial spirit started a revolution in manufacturing and labor that has shaped modern-day industry. While some people simply give up when faced with seemingly overwhelming obstacles, these young men did not let difficulties stand in their way. Boys of Grit Who Changed the World presents powerful examples of hope, perseverance, determination, and resolve through such influential men as Walter Scott, Robert Fulton, and Samuel Morse.

This inspiring book will give any boy or girl hope, courage, and the motivation that they too can become all that God intends them to be. He has equipped us all with the talents and power to live up to our calling!

“We are loving this book! My 10 year old son, who generally is not a fan of our read aloud time, looks forward to it with this book! He actually said, “Mom, I really like this book!” Thank you Lamplighter for publishing books that are full of people and characters I’m not afraid of my kids emulating!” — Valerie Hunt of Campbellsville, Kentucky

“Well written. Exciting stories of boys with every kind of disadvantage in life who overcame to accomplish great things for the world.  Would recommend this as reading for young or old but especially for young boys.” — Boyd Sellers of Avon, Indiana

Other books in the Boys of Grit set: