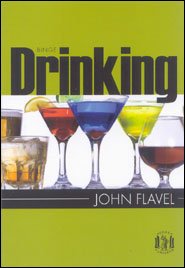 Often considered a modern phenomenon, binge drinking is in fact an age-old problem. John Flavel, a 17th-century Puritan minister in the naval port of Dartmouth, England, pulls no punches as he confronts the sin of drunkenness head on. Flavel’s treatment is a highly relevant expose of the soul-destroying evils of this detestable sin.

Often considered a modern phenomenon, binge drinking is in fact an age-old problem. John Flavel, a 17th-century Puritan minister in the naval port of Dartmouth, England, pulls no punches as he confronts the sin of drunkenness head on. Flavel’s treatment is a highly relevant expose of the soul-destroying evils of this detestable sin.

“Drunkenness is like a sudden landfall, which brings a great deal of dirt with it.”

“To read the work of a Puritan doctor of the soul is to enter a rich world of spiritual theology to feed the mind, heart-searching analysis to probe the conscience, Christ-centered grace to transform the heart, and wise counsel to direct the life. This series of Pocket Puritans provides all this in miniature, but also in abundance.”