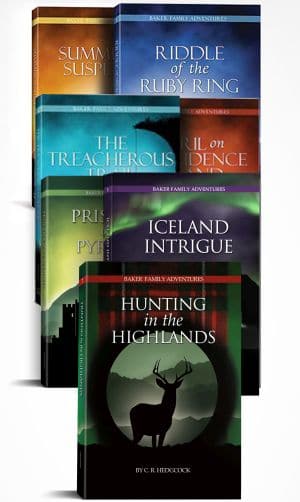 Meet Mr. and Mrs. Baker and their four children: responsible Phil, sensible Abby, daring Andy, and inquisitive Tom. The Bakers are a Christian homeschooling family who love helping others, and they seem to have a knack for finding people who need help. In the seven (7) volumes of the Baker Family Adventures Series by C. R. Hedgcock.

A big discount when purchased as a set of seven volumes!

Meet Mr. and Mrs. Baker and their four children: responsible Phil, sensible Abby, daring Andy, and inquisitive Tom. The Bakers are a Christian family who love serving and helping others, but they have a knack for finding adventure while they’re at it!  Exciting reading for youth in the six volumes of the Baker Family Adventures Series by C. R. Hedgcock. Recommended for ages 11-15, but make great family read-alouds too, for ages 6-10.

People sometimes think a Christian’s life is rose beds and sunny skies. But when the thorns start jabbing and the sun starts burning — that’s when the true test of character comes. The Bakers must deal with mysteries, kidnappers, buried treasures, and more, with each challenge forcing them to grow in courage and learn important lessons in godliness.

Most of my childhood reads were about individuals or groups of children going off on thrilling adventures by themselves. There were no parents around, and hardly any adults (except the villains, of course). Sound familiar?

A few years ago, I began wondering why this was so. Why do adventures have to take place when children are alone? Why are things suddenly more boring when parents are around? Yes, it’s true in real life that sensible adults tend to make sure children stay out of dangerous situations, but is the story view that “adventure only happens when we’re not around authorities” the right attitude to have? And is there a way to write something different?

This is the point I spent a long time pondering. What if whole families could go on thrilling exploits together? What if parents weren’t an impediment to adventure, but rather the reason children get into it in the first place? Wouldn’t this be a far more exciting (and Biblical) premise than the one currently offered by stacks of literature out there?

I began to think so, and the Baker Family Adventures Series was born.

The Series includes these seven books:

When Phil, Abby, Andy, and Tom Baker hear that their cousin Millie will visit their farm for the summer, little do they imagine what a dreary time they will have with the snobbish girl. But when Millie disappears, life quickly becomes anything but dreary.

What starts out as a summer of chores and horse-riding on the farm turns into a cross-country adventure, as the Bakers find themselves matching wits with a notorious jewelry thief who pulls them into her web. Aided by a seasoned detective, the Bakers confront numerous dangers in their search for Millie, all while attempting to foil the plot of a major crime ring — making it a summer they will never forget.

Filled with mystery and intrigue, Summer of Suspense contains important lessons of Christian courage, humility, submission to authority, and repentance before God and man.

The Bakers are full of excitement as they head to the English countryside to celebrate Grandfather Wilson’s eightieth birthday.

When an elderly neighbor with Alzheimer’s disease tells a tale of treasure lost on the high seas, the Bakers are sure she has confused reality with fiction. But as they find information that supports Old Marge’s story, they begin wondering whether there is truth in it after all.

Can the discovery of an ancient treasure help Old Marge stay in her beloved cottage and out of a nursing home? This question sends the Bakers on a swashbuckling adventure of mystery and peril, following an old diary through mysterious caves and a maze of clues in search of the missing treasure. Along the way, their quest is marked by amazing providences that point to this key conclusion: God’s ways are always right and true.

Book 3: RIDDLE OF THE RUBY RING

The skies are clear, the weather is beautiful, and the Bakers are eager to welcome a new family, the Wilburs, to the farm next-door. Phil, Abby, Andy, and Tom Baker are learning how to relate to their new friends when they discover a mysterious crate hiding an ancient ruby ring which triggers strange activity on the Wilbur’s farm.

A trail of clues leads to two conflicting stories of strife in the Old West, but it seems that the theft and aggression surrounding this ring haven’t stayed in the past. When the safety of both families is threatened, it’s up to the Bakers to figure out what is going on before it’s too late.

Can the Bakers bring an end to a legacy of conflict and restore honor to a tarnished family name? Can Andy learn the secret of his older brother’s courage? And, can they solve the baffling riddle of the ruby ring?

The Bakers and the Wilburs have become such good friends that they decide to vacation together at a lovely wilderness lodge. While the ladies and girls enjoy the lodge’s luxurious facilities, the men and boys go camping in the surrounding wild. They expect their greatest thrills to come from horse-riding, canoeing, and hiking, but the trip changes when they find an injured hiker. Then the hiker disappears with most of their supplies, and they’re stranded with little food, no communication, and a long trip back to civilization. What’s more — there are some very strange things going on in this forest, and the mysterious hiker seems to be at the center of them.

Mr. Baker must get his team back to safety with no supplies or means of contact, saddled with a thief who will not speak. Phil is forced to act like a criminal when thrown into a company of bad men, and the twins must survive in the wilderness with a man they do not trust.

Who is really Jigson? What mysterious activity is going on in the forest? And will they all come out alive?

Book 5: PRISONER OF THE PYRENEES

The Bakers are minding their own business when Briosa Del Quera bursts into their lives. Briosa is an orphaned Catalan girl who is still reeling from her grandfather’s death. His last words instructed her to find people called “Baker” and get in contact with a secret agent they know — but Jigson has gone missing in suspicious circumstances and not even his agency is able to contact him.

Detective Mortimer says that Mr. Jigson was last seen in the Pyrenees mountains, and the Bakers are determined to find him and help Briosa get to the bottom of the plot against her grandfather. But as their journey through northern Spain becomes a breathless race to avoid villains and meet allies, they wonder if Briosa has really told them everything…

The glider’s nose caught the air and Phil felt the harness tighten around him. In a moment, the cliff was gone and all their weight hung on the thin, triangular wings. The glider dipped in an accelerating drive, and the brothers took hold of the control bar with their yells whistling past their ears.
When Phil Baker has trouble with an invention he’s building, Detective Mortimer arranges for him to meet a mysterious, brilliant inventor who may the solution. The only catch is that reclusive Sigurd lives in Iceland … in hiding.
Phil, grieving the loss of a friend, is more determined than ever to keep his family out of an adventure – when they discover an organization with a machine that can trigger natural disasters, they know they’ve landed right in the middle of one. The organization leader says he wants to help the world, but with an old enemy at his right hand, his claim is hard to believe.
If the Bakers foil the plan of one villain, could they end up furthering the plans of a worse one? How does Sigurd know so much about both of them?
With the organization on the brink of unleashing destruction in a land of fiery volcanoes, and the future of the world at stake, the Bakers have to beat the countdown of “Earthquake the 2nd” and find out how much of the situation they understand … and how much is still intrigue.

Book 7: HUNTING IN THE HIGHLANDS

After the perils of Iceland, the Bakers  plan to enjoy a relaxing vacation with their relatives, the Drakes, in Scotland. Andy goes deer stalking with Uncle Clive, Abby goes horse-back riding and sightseeing with Phil and their cousin Millie, and Tom travels with his parents to the Isle of Bute.Three incidents throw the trip into a spiral of confusion, and, scattered across Scotland, the Bakers have clues that don’t seem to belong to the same puzzle. A government weapon has fallen into the hands of a top-secret  academy, and the only way to stop the spread of dangerous lies is to find the weapon and discover the significance of the name ‘Haelix.’
Get the entire set of Baker Family Adventures!