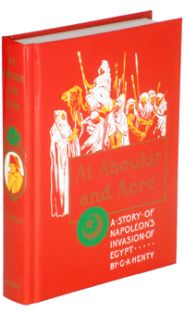 At Aboukir and Acre: A Story of Napoleon’s Invasion of Egypt (G. A. Henty)

The hero, having saved the life of the son of an Arab chief, is taken into the tribe, has a part in the battle of the Pyramids and the revolt at Cairo. He is an eye-witness of the famous naval battle of Aboukir, and later is in the hardest of the defense of Acre.

At Aboukir and Acre

A Story of Napoleon’s Invasion of Egypt

Many of us do not even know that Napoleon aspired to conquer as far as Egypt, and in 1798 found himself in the land of the Pyramids and the Sphinx! As is typical for the pages of a Henty story, the reader will be transported back to a time in history. Join Edgar Blagrove, son of a British Merchant in Alexandria, who is left behind when his father has to leave suddenly on the unexpected arrival of the French fleet.  He takes refuge with an Arab tribe and joins in opposition to the French in Cairo when they are cut off from home at the Battle of the Nile. Adventures abound from north Africa all the way to Palestine, until Napoleon’s historic defeat.