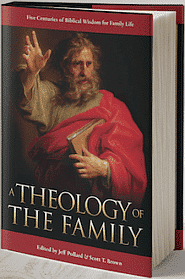 A Theology of the Family (Scott Brown, Jeff Pollard)

Each of them give a powerful testimony that the 21st century church needs to be reminded of what she used to believe about family life. These authors bring a measure of the correction and the balm necessary to heal our amnesia and return us to biblical order.

A Theology of the Family

This book presents a perspective on the family largely forgotten by the modern church. There are 56 authors featured in A Theology of the Family.  Among them are: John Bunyan, Jonathan Edwards, John Gill, William Gouge, Matthew Henry, Martin Luther.  A.W. Pink, J. C. Ryle, R. C. Sproul, Charles Spurgeon and Thomas Watson.

Each of them give a powerful testimony that the 21st century church needs as reminders of what she used to believe about family life. These authors bring a measure of the correction and the balm necessary to heal our amnesia and return us to biblical order.

“We are all placed in great debt to those whose vision and labors have produced this amazing collage of godly wisdom concerning this all important issue.”
— Albert N. Martin, Senior Pastor, Trinity Baptist Church, Montville, New Jersey (1964-2008)

“In the mid 1990s, it began to occur to me that the modern Church had actually lost the biblical doctrine of the family. Biblical fatherhood was dead. Feminists owned womanhood. Motherhood was despised. Babies were marginalized as thieves of convenience and success. In America, we have aborted millions of children since 1973. Marriages were crumbling, and the very institution was being redefined.

It was almost impossible to find men in the church who understood biblical manhood or fatherhood. The 20th century was a bad time for the family; the trends were all running in the wrong direction, and biblical ignorance was speeding the family on its way to destruction.”

Meanwhile, Jeff Pollard was doing something about it. He was toiling into the night to document a correct theology of the family. He brought these doctrines together in an organized form for the ministry of Chapel Library.  If you have known Jeff for any length of time, you know that the last twelve years of his life has been defined by his ministry to Mount Zion Bible Church and the unrelenting schedule to produce the Free Grace Broadcaster, a quarterly digest of Christ-centered sermons and articles from prior centuries. It is all about recovering sound doctrine and biblical practices. Jeff has produced dozens of booklets on subjects such as the gospel, sin, repentance, the Holy Spirit, the blood of Christ, justification, sanctification, secret sins, and many other critical matters.”

Through Jeff’s work at Chapel Library, there are a wealth of doctrinal resources being shipped all over the world. He brought them together in order to correct the lapses and pass them on to the rising generation. Jeff worked for over a decade to identify great authors and writings of the past to meet the problems of our day. Then he went back in time. He returned to eras where a Christ centered view of the family was understood much better. Jeff has revealed the doctrine locked in the literary treasure chests of the past. I am thankful that he also did this for the doctrine of the family.”

— Scott Brown, Director, NCFIC and Co-Editor of A Theology of the Family

This volume is a spiritual buffet for Christian family life, a delicious smorgasbord of short selections largely drawn from treasured Reformed writers. It dishes up biblical truth, loading the table with meaty explanation, sweet comfort, and well-spiced exhortation for fathers, mothers, children, and young people.

“There are many books on the family, so why another one? This is not just another one! I commend A Theology of the Family because it is a compilation of some of the best articles on the subject of the family from proven teachers of the last five hundred years.