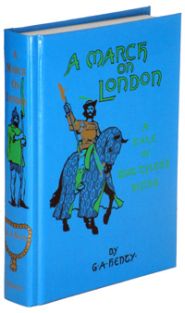 A March On London: Being a Story of Wat Tyler’s Insurrection (G. A. Henty)

The main character of the story is Edgar Ormskirk, the son of a scholar and scientist of Dartford. Edgar rejects following in his father’s footsteps and moves to London where he risks life and limb to save the life of a wealthy merchant. There is plenty of action as the rebellion flows into the streets of London. The ill-treatment of the peasants and their just demands for relief are forcefully presented in Tyler’s speeches. Our hero ends up in Flanders, so often tied to England’s history, for further adventures.

A March On London

Being a Story of Wat Tyler’s Insurrection

A March on London: The Story of Wat Tyler’s Insurrection is but little known, but the hero of this story passes through that perilous time and takes part in the civil war in Flanders which followed soon after. Although young he is thrown into many exciting and dangerous adventures, through which he passes with great coolness and much credit. Brought into royal favor he is knighted for bravery on the battlefield, and saving the lives of some wealthy merchants, he realizes fortune with his advancement and rank. New light is thrown on the history of this time and the whole story is singularly interesting.