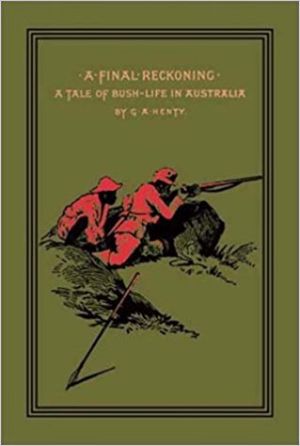 A Final Reckoning: A Tale of Bush Life in Australia (G. A. Henty)

Australia in the 1800s was a wild place! Reuben Whitney, escaping an unfair and misunderstood perception of him and his reputation in England, takes an adventurous passage ‘down under’ on board the Paramatta.

Shortly after arriving, he joins the police force and soon makes his heroic mark in conflicts with the Aborigines and Bushrangers. He even saves the life of a squire’s daughter! In one event after another, Henty tells Reuben’s story of adventure, close calls, all mingled with plenty of history about Australia!

Henty has written an exciting adventure of outlaws in the early days of the Australian gold rush!  Fortunes were made and stolen and bush rangers and natives were a formidable danger to settlers. All boys will read A Final Reckoning with eager and unflagging interest. The episodes are in graphic, exciting, realistic; and, as in all Mr. Henty’s books, they center on an honourable and manly character.

The hero, a young English lad, after rather a stormy boyhood, emigrates to Australia and gets employment as an officer in the mounted police. A few years of active work on the frontier, where he has many a brush with both natives and bush-rangers, gain him promotion to a captaincy, and he eventually settles down to the peaceful life of a squatter.

Of A Final Reckoning, Henty himself summarizes:

In this tale I have left the battlefields of history, and have written a story of adventure in Australia, in the early days when the bush rangers and the natives constituted a real and formidable danger to the settlers. I have done this, not with the intention of extending your knowledge, or even of pointing a moral, although the story is not without one; but simply for a change—a change both for you and myself, but frankly, more for myself than for you. You know the old story of the boy who bothered his brains with Euclid, until he came to dream regularly that he was an equilateral triangle enclosed in a circle.

Well, I feel that unless I break away sometimes from history, I shall be haunted day and night by visions of men in armour, and soldiers of all ages and times. If, when I am away on a holiday I come across the ruins of a castle, I find myself at once wondering how it could best have been attacked, and defended. If I stroll down to the Thames, I begin to plan schemes of crossing it in the face of an enemy; and if matters go on, who can say but that I may find myself, some day, arrested on the charge of surreptitiously entering the Tower of London, or effecting an escalade of the keep of Windsor Castle! To avoid such a misfortune—which would entail a total cessation of my stories, for a term of years—I have turned to a new subject, which I can only hope that you will find as interesting, if not as instructive, as the other books which I have written.