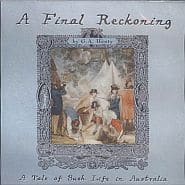 Australia in the 1800s was a wild place! Reuben Whitney, escaping an unfair and misunderstood perception of him and his reputation in England, takes an adventurous passage ‘down under’ on board the Paramatta.

Shortly after arriving, he joins the police force and soon makes his heroic mark in conflicts with the Aborigines and Bushrangers. He even saves the life of a squire’s daughter! In one event after another, Henty tells Reuben’s story of adventure, close calls, all mingled with plenty of history about Australia!

The hero, a young English lad, after rather a stormy boyhood, emigrates to Australia and gets employment as an officer in the mounted police. A few years of active work on the frontier, where he has many a brush with both natives and bush-rangers, gain him promotion to a captaincy, and he eventually settles down to the peaceful life of a squatter.

About G. A. Henty