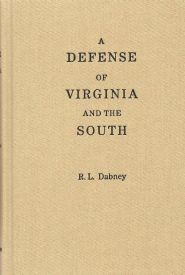 A Defense of Virginia and the South (Robert L. Dabney)

An informative and challenging book to modern presuppositions about the War Between the States. You may not agree with everything Dabney has to say, but he is worth hearing, as a prophetic voice of things to come, when the conflict between the southern and northern states was handled as it was. A revealing look back at 19th-century American history.

A Defense of Virginia and The South

An informative and challenging book to modern presuppositions about the War Between the States. You may not agree with everything Dabney has to say, but he is worth hearing. He was a prophetic voice of things to come, as many of his predictions have turned out accurate.  A revealing look back at 19th-century American history.

Planter, quarryman, builder, teacher, pastor, architect, theologian, writer, army chaplain, soldier, husband, and father – Robert Lewis Dabney (1820-1898) was all of these, and more. He was born in March, 1820 in Louisa County, Virginia, to a family of mixed English, Huguenot, and Scottish descent. His Huguenot ancestry was from the family originally known as d’Aubigné. Robert was the sixth child of Charles (a planter, church elder, and member of the county court) and Elizabeth Dabney. His father died when he was aged 13, and three years later he entered Hampden-Sydney College as a sophomore. Financial circumstances prevented from completing the BA course. However, during his time at Hampden-Sydney he was deeply affected by a revival at the College, and in 1837 he was received into membership of the local Providence Presbyterian Church.

After a period variously helping his mother run the plantation, including working in the fields, quarrying stone for rebuilding a flour mill, and teaching in the local school, Dabney entered the University of Virginia in 1839, obtaining his MA in 1842. For the next two years he was again engaged in work around the family plantation, in teaching, and in writing articles for the Richmond papers. Although offered an important editorial position, he instead entered Union Theological Seminary at Hampden-Sydney in 1844 to study for the ministry.

Dabney completed his studies at Union Seminary in May 1846, and with a preacher’s license issued by the West Hanover Presbytery returned to his home church at Providence where he was engaged in preaching and pastoral work. In 1847 he was called to be pastor of Tinkling Spring Church in Augusta in the Shenandoah Valley. During his time at Tinkling Spring a new church building was built, designed by Dabney in the Greek Revival style – a style which was to influence church architecture elsewhere in Virginia. In 1852 he was awarded the degree of Doctor of Divinity by Union Theological Seminary.

Eight months after arriving at Tinkling Spring, Dabney married Margaretta Lavinia Morrison (28 March 1848). They were to have six sons, of whom three would die in childhood of diphtheria. He helped to build their stone house with his own hands.

In August 1853 Dabney accepted a call from Union Seminary to become Professor of Ecclesiastical History and Polity. From that time he became increasingly busy as a writer of articles for both church and secular papers.

Dabney’s long career as a teacher of systematic theology began in 1859 when he was appointed Adjunct (from 1869, full) Professor of Systematic Theology at Union, a post in which he was to serve, through the Civil War, until 1883 – in spite of offers (in 1860) of the  prestigious pulpit of Fifth Avenue Presbyterian Church in New York. He was also offered a position as Professor of Church History on the faculty of Princeton Theological Seminary.

As well as his seminary teaching, Dabney pastored the College Church at Hampden-Sydney (until 1874). During this time a new church was built, the work personally superintended by Dabney, who again designed the building.

When the Civil War started in 1861, Dabney enlisted as a chaplain with the Eighteenth Virginia Volunteers in the Confederate army, camped at Manassas. He would preach to the troops (including their Colonel, Robert E. Withers, and Brigadier General Thomas ‘Stonewall’ Jackson) while standing on a wooden box, and ‘he was blessed with the sight of men won to Christ through his ministry, and with saints edified’ [Thomas Cary Johnson].

He wrote in a letter at that time, ‘our camps are places of much prayer and afford many shining examples of Christian consistency.’ Dabney was with the regiment at the First Battle of Manassas (First Bull Run, 21 July 1861), the engagement in which Jackson earned his famous sobriquet when he and his Virginians stood their ground against the enemy ‘like a stone wall.’  Colonel Withers dated his conversion to Dabney’s thanksgiving sermon following this battle. The next month, however, a fever forced Dabney to return home to Hampden-Sydney.

Preaching to the Troops

In April 1862, Jackson offered Dabney a position as his Adjutant-General, or chief of staff, with the rank of major, and the opportunity – where possible – to preach to the troops on Sundays. In spite of having doubts about his fitness for the position, Dabney was prevailed upon and served with distinction for four months through the (Shenandoah) Valley Campaign (when he was instrumental in saving Jackson’s entire ammunition train at Port Republic) and the Seven Days’ Battles around Richmond in the summer of 1862. During the Union retreat from Gaine’s Mill on 27 July, Dabney was even left in charge of the corps while Jackson was absent on a reconnaissance mission.  ‘The most efficient officer that he knew’ was Jackson’s verdict. But severe illness yet again forced Dabney to leave the army, although he did pay two or three visits to the Army of Northern Virginia to preach in 1864.

After Jackson was mortally wounded at Chancellorsville on 2 May 1863, dying of pneumonia eight days later, his widow asked Dabney to prepare a biography of her husband. His two-volume Life and Campaigns of Lieut.-Gen. Thomas J. Jackson (Stonewall Jackson) appeared in 1865, presenting ‘a worthy tribute to the great Christian hero with whose life it deals’ (Henry Alexander White).

Dabney continued to teach at Union Seminary, while maintaining a prominent position in his denomination. He was moderator of the Southern Presbyterian Assembly in 1870. In the aftermath of the War and the bitter Reconstruction which followed, he produced several books supporting the position of the Old South. In 1870 his lectures on the preparation and delivery of sermons were published under the title Sacred Rhetoric.  His lectures on theology were published the following year as Syllabus and Notes of the Course of Systematic and Polemic Theology taught in Union Theological Seminary, Virginia. Books on philosophy followed, along with a collection of articles from various periodicals, edited by C. R. Vaughn. These were published in four volumes as Collected Discussions.

In 1883, health considerations led to Dabney resigning from his chair at Union and moving to the new University of Texas at Austin as Professor of Mental and Moral Philosophy and Political Economy. He taught there for eleven years, and at the same time at Austin Theological Seminary, which he co-founded.

In the late 1880s, Dabney developed an astigmatism and eventually glaucoma. An attempt at surgical correction at Baltimore in 1886 proved unsuccessful, and his eyesight got increasingly poor until he became completely blind in 1889. This did not stop him from teaching, however. He employed a private secretary to write at his dictation and to read for him, so that he could continue his studies.

Dabney continued teaching until 1894, when the University asked him to resign. The following year he and his wife moved to Victoria, Texas, to the home of one of their sons. It was there that Dabney died in January, 1898. At his request, his body was buried in Virginia Cemetery at Hampden-Sydney College.

Other books by or about R. L. Dabney at Grace & Truth Books: