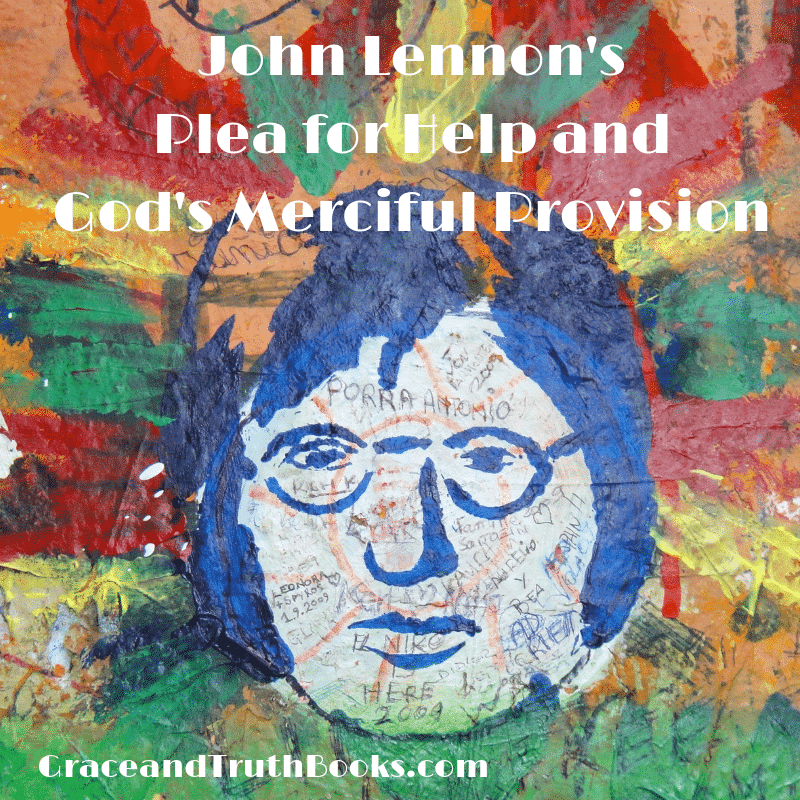 Recently I wrote about Paul McCartney. It seems only fitting that I write about his songwriting partner John Lennon as well.

In March 1965, only a year after the Beatles appearance on the Ed Sullivan Show, Lennon wrote the #1 hit “Help!” McCartney was called in at the end to help with the countermelody but the song and lyrics were pure John Lennon. “Help!” spent three weeks atop both the US and UK pop charts and was the title song for the 1965 Beatles movie “Help!”

In a 1970 interview with “Rolling Stone” magazine, Lennon said he felt that “Help!” was ”among his most honest, genuine Beatles songs.” Writer Ian MacDonald described the song as “the first crack in the protective shell Lennon had built around his emotions during the Beatles’ rise to fame.”

Lennon had more to say about “Help!” in another interview but I’ll save that for later. First a personal memory.

Sometime in the early 1990’s I was walking through an upscale Kansas City mall and wandered into an autograph store. The store featured authenticated autographs of people like Lincoln, Washington, Jefferson, Einstein, Edison, Churchill and more. Each autograph was meticulously framed with some sort of letter establishing the provenance of the signature. Some were just a simple signed check or receipt yet the prices soared into the tens of thousands of dollars.

One document, in particular, caught my attention. It was the enormous, flowing, scrawl of John Lennon on a brief handwritten letter above his signature on Apple Records letterhead. A neatly type-written letter was framed next to it, explaining the story behind the letter. The explanatory letter was written by a college student at the University of Kansas. He explained that as a Christian, he was worried about John Lennon’s soul and had written him a brief letter in which he referred to Lennon as “brother” and briefly explained the gospel and encouraged him to consider asking Jesus to be his savior. The handwritten letter before me was Lennon’s angry response.

Of course, I’m paraphrasing from a memory more than 25 years ago, but Lennon’s response was terse: “First off, don’t ever call me brother. I’m not your brother and I don’t need a savior so you can keep your Jesus.” Those few words filled an entire page and Lennon ended the letter with a bold signature.

I was fascinated from a historical point of view, but perhaps more importantly as a Christian. Here was clear evidence that someone had explained God’s plan of salvation to Lennon and that it had been emphatically rejected.

“When I was younger so much younger than today
I never needed anybody’s help in any way
But now these days are gone I’m not so self-assured
Now I find I’ve changed my mind, I’ve opened up the doors

Help me if you can, I’m feeling down
And I do appreciate you being ’round
Help me get my feet back on the ground
Won’t you please, please help me?

And now my life has changed in oh-so-many ways
My independence seems to vanish in the haze
But every now and then I feel so insecure
I know that I just need you like I never done before.”

During a 1980 interview, Lennon recalled writing “Help!” saying “the whole Beatles thing was just beyond comprehension. I was subconsciously crying out for help.”

During the 15 years between the writing of “Help!” and that interview, Lennon had tried every imaginable avenue to find peace and meaning in this world from eastern mysticism to drugs and everything in between but without success.

And now, back to that framed, handwritten letter.

As I stood staring at Lennon’s letter the date leaped off the page. Lennon had written the letter in December 1980. I don’t recall the exact date, but it was no more than a week before he was shot to death by Mark David Chapman while walking home to his apartment from the recording studio with his wife Yoko Ono late one evening in New York.

God had mercifully thrown John Lennon a lifeline in the final days of his life but Lennon had angrily rejected true Peace and true Love in a furiously written response. It shocked me that Lennon felt so strongly about it that he sent a handwritten letter to a young college student. Why wouldn’t he just throw the offending letter away? Why bother to respond? My guess is that God wanted written evidence that His Mercy had been offered… and firmly rejected. Somewhere, someone owns that letter which stands forever as proof of God’s Mercy.

In Luke 12:20 Jesus says these words: “But God said to him, ‘Fool! This night your soul will be required of you; then whose will those things be which you have provided?”

I’ve lost several friends to sudden heart attacks and grinding automobile accidents. None of us knows when this life will come to an end and we will stand face-to-face with eternity and the One who created us.