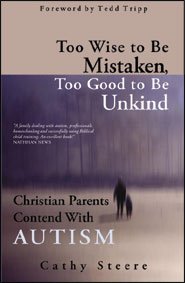 Too Wise To Be Mistaken, Too Good To Be Unkind (Cathy Steere)

In Too Wise to be Mistaken, Too Good to Be Unkind, you will join David, Cathy, and Drew Steere on their difficult, yet remarkable journey into the complex world of autism.

More than a “how-to” manual on dealing with a special needs child, this is the heartwarming testimony of two parents who placed their trust in their faithful Heavenly Father and lovingly persevered in training Drew in the nurture and admonition of the Lord. A powerful testimony to the sufficiency of Scripture in all of life.

Too Wise to be Mistaken, Too Good to be Unkind

In Too Wise to be Mistaken, Too Good to Be Unkind, you will join David, Cathy, and Drew Steere on their difficult, yet remarkable journey into the complex world of autism.

More than a “how-to” manual on dealing with a special needs child, this is the heartwarming testimony of two parents who placed their trust in their faithful Heavenly Father and lovingly persevered in training Drew in the nurture and admonition of the Lord. A powerful testimony to the sufficiency of Scripture in all of life.

Includes a foreword by Tedd Tripp, author of Shepherding A Child’s Heart.

Cathy Steere and her husband, David, live in Washington state and homeschool their two sons, Drew and Elliot. She is author of Too Wise to be Mistaken, Too Good to be Unkind.  They are members of Providence Reformed Baptist Church of Tacoma.  Cathy has contributed magazine articles on autism and is frequently consulted to assist parents of special needs children. Drew is now (as of 2018) a thriving adult serving well in home, church, and community.

“Too Wise To Be Mistaken, Too Good To Be Unkind is excellent in every way. This emotional story of how the Steeres approached their responsibilities as parents demonstrates how we all should approach our responsibilities — with the Bible as our guide. They persevered even when the outcome was not as they expected. I believe that Cathy Steere is the expert regarding Drew. But when they consulted “experts”, they were told that the structure they had provided was just what he needed. This structure is providing continual progress. One lesson of great encouragement: God equips us for the task He gives.”

Below is from The Seasons of Life with an Autistic Child by Cathy Steere:

“Mommy, tell me a winter story about when you were little,” my son, Drew, begged, climbing next to me on the bed.

Having discussed, earlier that day, the four seasons and their differences, I understood why he put his request in for a seasonal pastime report. “Hmmm,” I said, lightly tapping my chin, trying to think of one. My eight- and ten-year-old boys loved hearing any story I told, no matter how trivial, about the time when I was little. It seemed hard for them to think of me as anything but their mommy, a grown-up married to their daddy. “Okay,” I said smiling, “here’s one.”

I sat up part way, leaning back on my elbows. Drew beamed, locking eyes with me, anxious for a tale about my girlhood in the snow. It began with, ”When I was your age,” which was always an appealing start to any story I told him, “my sisters and I woke up one morning to discover several feet of snow had fallen onto our little city during the night.”

I described how we felt, barely able to contain ourselves, aching to get out and play in it. I admitted that we didn’t know what made us happier—playing in the fresh snow or the fact that school had been called off for the day. Then I told how we went into the house for lunch and ate cream of mushroom soup and English muffins with butter and how good and warm it felt in our tummies. Drew smiled, wanting more, but was satisfied when I stated, “The End.”

After he had gone, I thought about the seasons we parents with special needs children go through. And while there are four of them, like the seasons in creation, I found that we have traveled through them by way of an almost backward trek.

When we discovered that Drew had autism, back when he was nearly four years old, it was like we had just been told he had died. What actually died was the realization that things were not what we believed, that our child was not normal, but severely impaired, neurologically. There was a sense of death when we peered into the future. No longer seeing the brightness most parents see for their beloved child’s life, we saw only bleakness and loss. This was our winter: a harsh, bitter coldness. Darkness. Death.

After plowing through piles of books on the subject of autism, my husband and I charted a course of action to address this insidious condition. We then began an intensive individualized home program, working one-on-one with Drew, seven days a week. After pouring our lives into desperately trying to save our son, hope appeared. There was progress.

Yes, there was still a long, hard road before us, but we had found our way out of the cold. We could see color now, beautiful colors all around us. And like the leaves flitting and swirling to the ground during the autumn season, so, too, was the releasing of symptoms of autism for Drew and, as well, the letting go of the feelings of despair in my husband and me. And although there were some stubborn leaves, as there always are, which cling tightly to the branch of a tree, not yet ready to give in to the beckoning wind, we knew that it was only a matter of time before they, too, would find their way to the ground, no longer a part of that which they once adorned.

With the summer comes the heat. Overwhelming. Smothering hotness. We were told, as we carried out Drew’s therapy, to be prepared. Often things get worse before they get better. That first year was intense. We sweated through our sessions. New issues would come up in Drew that needed attention. We felt we were running at a feverish pace, thirsty for the finish line and desperate to survive. And yet, despite the heat, it was clear that sunshine had arrived along with it. The beauty of the sunshine whispered to us to persevere.

I would say that today we are enjoying the springtime. Seven years after beginning our hometherapy program, as well as adding other therapies along with it, I can honestly say we see growth, and life, and blooms wherever we look. The goals in Drew’s development are being realized. God is giving us great comfort and hope in regard to Drew’s character development. God is giving Drew sensitivity to the Truth of His word.

One of my first thoughts when Drew was diagnosed was, “How can he ever be saved?” I could not see how a child who could not understand the love his own parents had for him, and who had no ability to reason or communicate, could know the love of God and his need for a Savior. Then I remembered, “God is the One Who saves. No one on earth—normal or impaired—has any hope apart from the grace of God.” It was all about grace, God’s grace.

Asking About the Gospel

Just recently Drew meandered into the kitchen where I was making sandwiches and asked me, “Mommy, how do you become a Christian?” I set my knife down and taking his hands in mine, I told him how to be saved. This was not the first time he had heard it, but it was the first time he had asked about it. I am ashamed to admit that I, again, wondered if, with his yet limited understanding, it was even possible for him to be saved, until, by God’s kind providence, I happened to read this quote by J.C. Ryle that very evening:

“The extent to which one man may have true saving grace, together with much ignorance, and another may have much head knowledge and yet no true saving grace, is one of the greatest mysteries in religion, and one which the last day alone will unfold. ” — J.C. Ryle “The Gospel of John” 1873

The constancy and surety of the changing seasons reveal the steadfastness of our Creator and our God. All of mankind is a witness to this, never having to wonder or worry if the next season will indeed come. God shows us that we can trust in Him. We can trust that His good and wise decree will be carried out in His world and in our children. Their development, their character, and their salvation. Trust in Him. The spring comes when He sends it.

Too Wise to be Mistaken, Too Good to be Unkind.